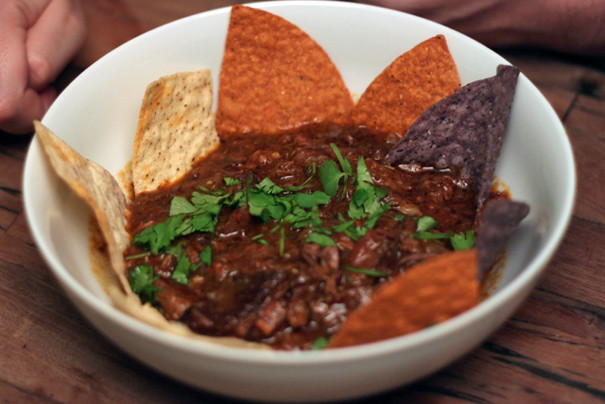 What happens when a famous French chef offers up a recipe for chili? Here’s what happens: the birthday girl that you make it for (in this case, Diana) writes you an e-mail the next day that says, “Best chili I’ve ever had, hands down.”

Notice I’m not the one saying that. It’s not because I don’t agree, it’s that I’ve already done a post called The Best Chili of Your Life. That chili came from Michael Symon, a man who was born to make chili. This recipe comes from Daniel Boulud, a man who was born to serve foie gras-stuffed truffles at his Michelin-starred restaurant Daniel. Symon’s chili is all explosive flavor; Boulud’s chili has deep, layered flavor, flavor that doesn’t hit you over the head but sort of blooms in your mouth.

The process behind the chili reveals the mind of a great French chef at work. What makes chili chili? Well, chiles. So Boulud doesn’t turn to chili powder, as a lesser chef might; he has you grind your own. You toast chiles in a skillet (Ancho, Guajillo, etc., all of which I bought at the Grand Central Market): 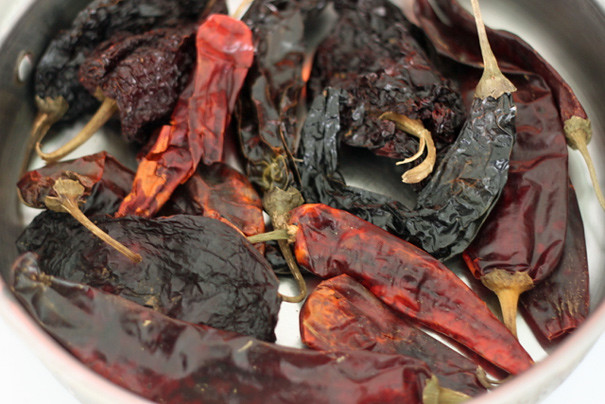 This step reminded me of Lisa Fain’s 7-Chile Chili which, come to think of it, this chili shares much in common. Except with that chili, you grind the toasted chiles in a blender with water; here you grind the chiles (a little at a time) in a spice grinder. 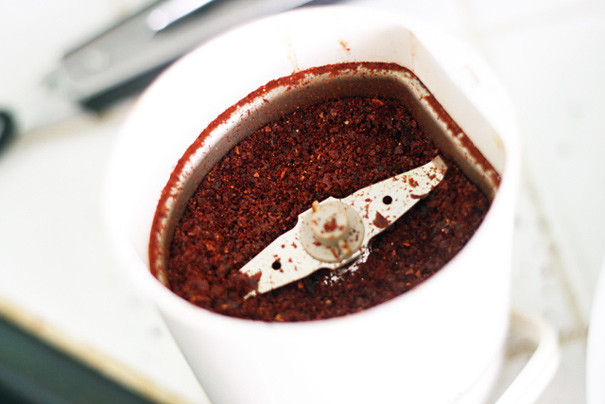 This makes more chili powder than you need; I put the leftovers in a baggie which I gave Diana to take home as an additional birthday gift.

A step that’s entirely unique to Boulud’s recipe (and one I’ve never seen before) is this: you mix Masa Harina (which I use to make fresh corn tortillas) with lime juice, lime zest and water. 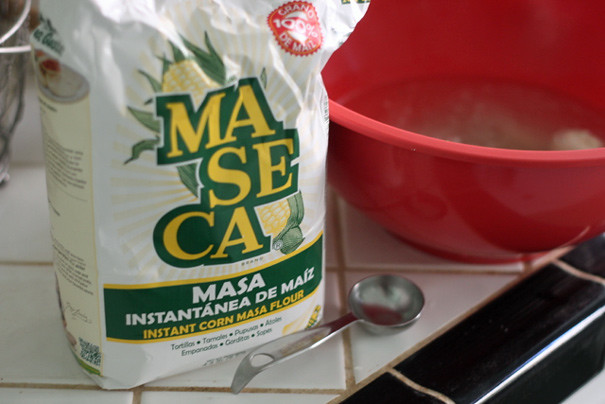 Sort of like a Mexican slurry, this works to thicken your chili later on and adds a nice lime undercurrent which speaks to the layers of flavor.

Now, for the beef. Boulud recommends a combination of chuck roast that you cube yourself and chuck roast ground by your butcher. I just bought 4 pounds of chuck roast and cubed half of it and chopped the rest as finely as I could (which wasn’t very fine at all but it didn’t matter). That beef gets browned in a pot with olive oil. 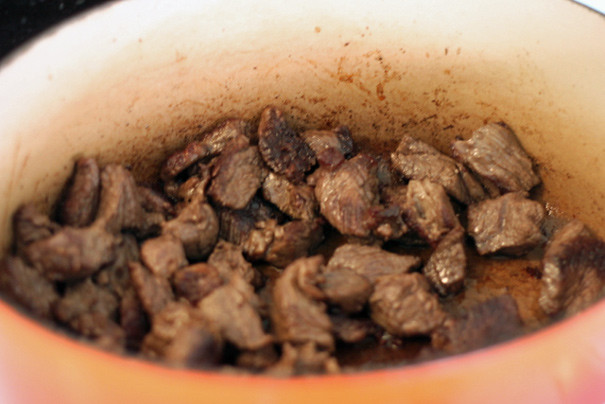 Notice the nice color I got on it: that almost didn’t happen. I overcrowded the pan and even though the oil was hot, I added salt (which I like to do to flavor the meat) and all this liquid came out and instead of searing, the beef started stewing. Thinking quick, I tilted the pan with an oven mitt and ladled out all the liquid. There was lots to ladle out. But when I was done, a few minutes later I heard a loud sizzle and knew I was in good shape. And I got great color.

The beef gets taken out of the pot and then you add bacon. 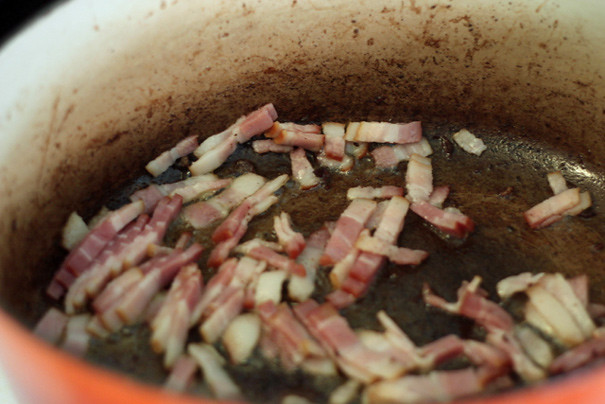 When the bacon gives up it’s fat, you add a chopped onion, chopped garlic, cumin, oregano and salt. 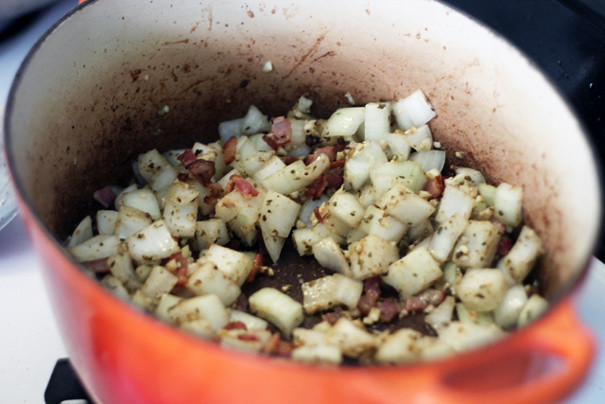 Then you add a bunch of that homemade chili powder and cook until everything is coated. 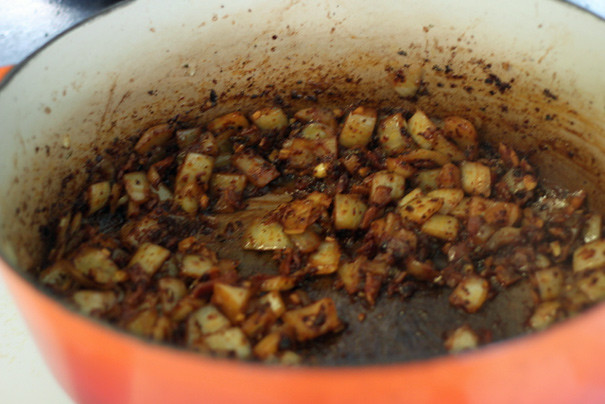 You deglaze with vinegar and Worcestershire sauce (that’s a very French step right there), then add your beef back along with tomatoes (I used canned) and the Masa/lime juice/lime zest/water mixture. Also a bay leaf. 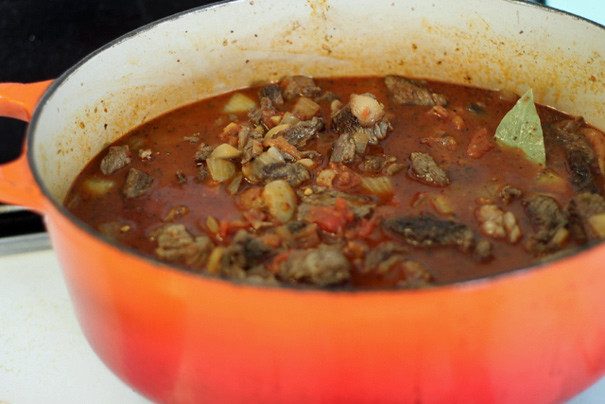 Here’s another unique fact: this chili cooks in the oven at 300 degrees instead of a stove top. It takes about two hours but, because the chili wasn’t thickened to my liking when I took it out after two hours, I took the lid off and put it back in for another 45 minutes. That did the trick.

Boulud says to serve this with “sliced cucumbers and avocado alongside.” That’s just a little too fussy and French for me. Instead, I offered up sour cream and tortilla chips (you can see how Craig decorated his bowl in the top image).

It’s funny to turn to a Frenchman for a superlative chili recipe, but there’s no denying the appeal of this one. So fire up your Les Miz soundtrack, get yourself some dried Anchos, and get to work. Just don’t call it “Le Chili” and you’ll be safe.