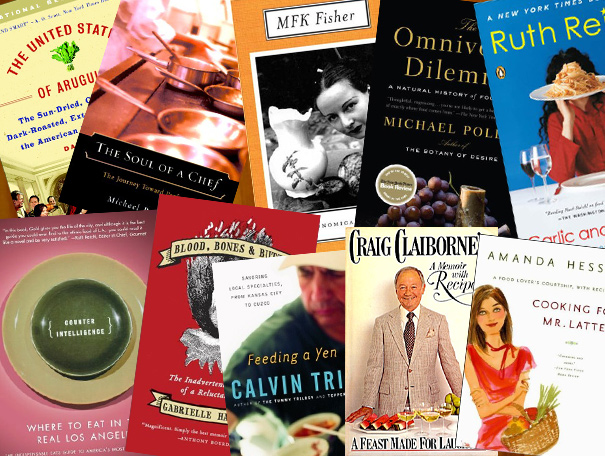 The first food book that I ever read (and the first food book that changed my life) was Calvin Trillin’s Feeding A Yen. I don’t recall what led me to it, but I remember the first chapter incredibly well: Trillin’s daughter no longer lives in New York and he thinks he can woo her back if he rediscovers the pumpernickel bagel that she loved in her childhood. This feat of food writing–which deftly juggles comedy, pathos, and an encyclopedic knowledge of the New York bagel scene–immediately revealed to me that food writing didn’t have to be stuffy or pretentious. Though Trillin takes food seriously, he doesn’t take himself too seriously; his lightness of touch is unmatched in the business. Which is why this book tops the list (though the rest of the list is no particular order); it’s the book that made me want to be a food writer.

2. The Gastronomical Me by M.F.K. Fisher. (Read my original review here.) There’s nothing frivolous about food in M.F.K. Fisher’s world. She led a deeply-felt life, as deeply-felt as that of any great artist, and she channels her passions through her palate; she reveals how food is profoundly and inextricably linked to life’s most intimate moments. Love, family, and war all play a part in Fisher’s story here: and specific episodes–like her trip to Mexico with her brother–are forever lodged into my memory. Fisher sets the bar by which all other food writing must be measured and this book is one of her best.

3. Garlic and Sapphires by Ruth Reichl. This is the story of a Berkeley hippie chick who becomes the food critic for The New York Times, a story that involves wigs, disguises, political intrigue (“The king of Spain is waiting in the bar, but your table is ready”) and emotional breakdowns and breakthroughs. What Reichl excels at as a food writer (besides her ability to evocatively describe how something tastes) is her ability to self-mythologize; her everyday affairs take on the stuff of legend. (Just follow her on Twitter for proof.) That skill-set–to turn one’s ordinary dinner into a story for the ages–reminds us that food writing shouldn’t just be for a niche audience, it should be entertaining for everyone.

4. The Omnivore’s Dilemma by Michael Pollan. (Read my original review here.) Every time I go to the supermarket, this book rises up in my head and speaks to me. Doesn’t matter if I’m looking at eggs (free-range? organic? pasture-raised?) or beef (grass-fed? hormone-free?), this book has changed the way that I think about everything that I eat. Because of this book, I make a point to visit farmer’s markets as often as I can; because of this book, I think twice before eating a fast food hamburger. And as wholesome as that all sounds, this book–which may be the most important book written about food in the last decade (or more)–also happens to be a very fun read. How Pollan pulled that off remains a mystery, but the book’s success speaks for itself.

5. Cooking For Mr. Latte by Amanda Hesser. (Read my original review here.) It’s interesting to me that Amanda Hesser wound up on the web with Food52. Because, in many ways, “Cooking For Mr. Latte” paved the way for food blogs: though the chapters are longer than a typical food blog post, the idea is pretty much the same. A story–usually involving Hesser’s eventual husband, Tad Friend, or her family–precedes a cluster of recipes that come from that story. This was the first time I’d experienced recipes in the context of story and that notion, that recipes taste better when they have a context, is something I believe in very firmly today. I credit this book for helping me see that; it’s very much the inspiration for the way I approach recipes on my blog.

6. Blood, Bones & Butter by Gabrielle Hamilton. When I was in grad school, teachers used to harangue me to stop hiding behind my humor, to write what really scared me. I never really knew how to apply this to my food writing until I encountered Gabrielle Hamilton and her very brave, searingly truthful book. Hamilton’s prose is like lightning–it cuts while it illuminates–and the story that Hamilton reveals, of her family, her career, her love life and her children is one that’s only enhanced by writing so artful, so elegant, so funny, I agree with Anthony Bourdain when he calls it “simply the best memoir by a chef ever.”

7. The Soul of a Chef by Michael Ruhlman. Before reading Ruhlman’s “Soul of a Chef,” I had no concept of the discipline, the obsessiveness, the sheer masochism required to cook at the highest level. I thought good food was prepared by jolly people in festive kitchens where wine poured freely and parsley was thrown willy-nilly on to a plate. Ruhlman, who’s a master at weaving a compelling food narrative, reveals in this book a world of pulsing intensity and fanatical dedication to the craft of cooking. By the time I was done reading it, I had a totally different appreciation for the food that appeared on my plate at a fancy dinner. It takes a lot more than just butter to make food on that level.

8. The United States of Arugula by David Kamp. (Read my original review here.) The scope of this book is breathtaking; Kamp provides a crash course on everything that happened in food in 20th century America. If it were just a history book, though, it’d be hella boring and this book is anything but. It’s gossipy, it’s tawdry (there’s sex…with chickens) and incredibly informative. When I was done with this book, I had a much clearer sense of who means what to the American food movement and how those contributions still resonate today.

9. A Feast Made for Laughter by Craig Claiborne. (Read my original review here.) I hesitated putting this book on my list because it is, in many ways, a flawed book. It starts promisingly enough in Sunflower, Mississippi where young Craig Claiborne (one of the three most important figures in American food history, according to David Kamp’s book) was born and raised. It takes us overseas, where Claiborne served in the war; it brings us to the offices of The New York Times, where Claiborne became the paper’s first food critic; and it occasionally brings us into the dark recesses of Claiborne’s soul, where Claiborne struggled with his sexuality and his relationship with his mother (who he eventually parted ways with in a dramatic scene at a New York hotel). If Claiborne really went for it, like Gabrielle Hamilton in her book above, this book would be an absolute must-read; as it stands, though, I still have it on my list for the fascinating way that Claiborne struggles to tell his own story. Finding the real story beneath the story is almost as fun as reading Nabokov’s “Pale Fire” (and it helps if you’ve read “Arugula” first because Kamp shares many details about Claiborne’s life that Claiborne doesn’t share himself). The book itself may not be a masterpiece, but Claiborne certainly was a character and this book is a window into that troubled character’s soul.

10. Counter Intelligence by Jonathan Gold. This is a funny book to end on because it’s (a) a guidebook; and (b) it’s pretty out of date. But when I first discovered this book (via Calvin Trillin’s book, I believe) I was living in Los Angeles (this was back in 2003), working at a law firm, and pretty miserable. Then this book came along and revealed to me that adventure lay right there at my feet, all I had to do was hop in my car, open this book’s pages and let my stomach lead the way. Before Jonathan Gold’s “Counter Intelligence,” I was pretty unadventurous when it came to trying new places–I stuck to the ones I knew. But with this guidebook, I sampled cuisines I’d never heard of before, dragged my friend J.C. to a hamburger stand in the middle of nowhere, ate pastrami that rivaled the best pastrami in New York, and–most importantly–I learned that there was a culture of food and food people that I might one day become a part of. Nine years later, here I am, living in Los Angeles, very much a food person, with a banged-up copy of “Counter Intelligence” in my car. It’s a book I’ll always be glad to have.