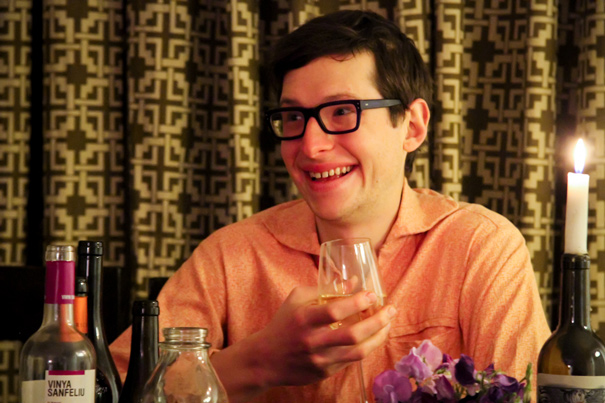 I don’t follow sports, but I know that there are these people called scouts who go around to minor league events and look for future stars to recruit to the majors. Well, I never considered myself much of a chef scout, but that all changed on Sunday when food blogger Andy Windak–of the food blog The Wind Attack–invited us over for dinner. I was wary of this 25 year-old who talked a big game the first few times that I met him (he said something about marinated yucca blossoms) but what I didn’t realize was that he was the real deal: a self-taught, self-motivated prodigy who works wonders in the kitchen.

At our meal, we were joined by Whitney Adams, a sommelier and blogger (Brunellos Have More Fun) who once gave my parents the thrill of a lifetime when she was the hostess at Wolfgang Puck’s Cut, and they asked her if there were any celebrities there that night and she said, “No, but I recognize you as Adam’s parents from The Amateur Gourmet!”

My parents tell that story all the time (it was proof that maybe I was wise not to become a dentist or lawyer after all) so it was a thrill to finally meet Whitney. Here we are with her (my hair is doing something CRAZY; is there more static electricity in L.A.?): 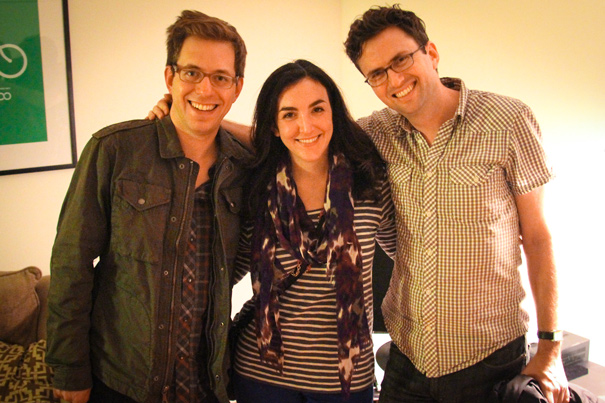 Whitney, who works now at Domaine L.A., brought some truly fabulous wines to this dinner party (you can read all about them in her post; for that matter, Andy has a post about this dinner too). (Oh, and I should say most of these photos are from Andy’s camera; my pictures, taken with my phone, obviously didn’t come out as good.)

For the first course, Andy made a wild fermented vegetable salad which was unlike any salad I’ve experienced before: 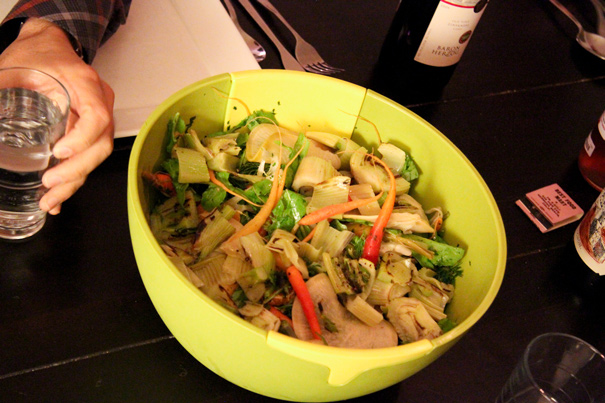 First, though, let’s admire that bowl–which has detachable sides that allow you to toss and serve the salad (Andy, tell us where to buy it in the comments!): 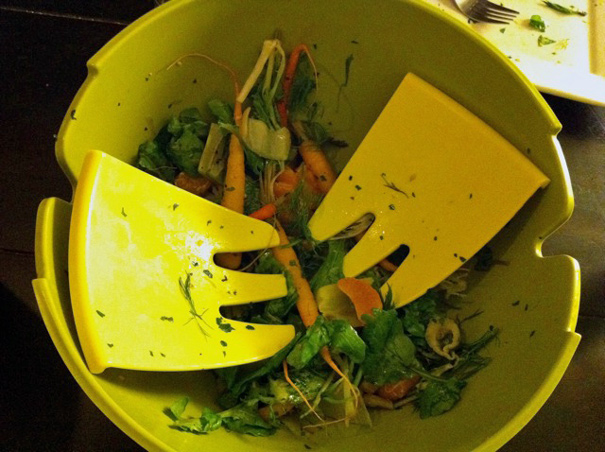 As for the salad itself, here it is on the plate: 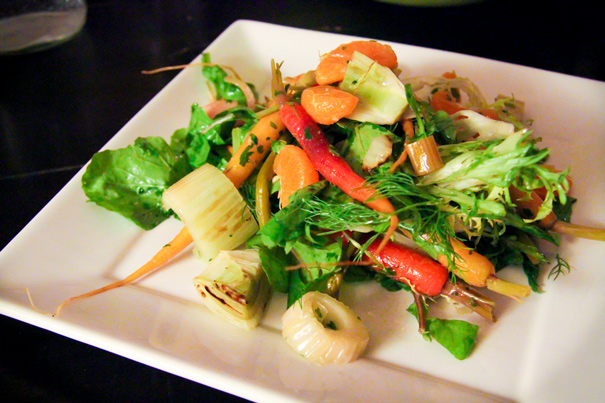 The salad was like a Stefon routine from SNL: “This salad has everything…red carrots and asparagus fermented in a salt brine, grilled fennel hearts, tree-ripened satsumas….”

But the wild fermentation was the real wow-factor here: Andy treated these vegetables (the carrots, the asparagus, and also, apparently, broccoli) the way Koreans treat cabbage for Kimchi (minus all the spicy stuff). He placed the cleaned vegetables in a bucket, boiled water, added a good amount of salt, allowed the water to come to room temperature and then poured it over the vegetables which he then weighed down with plates. A few days later, the vegetables had fermented and took on a funky flavor that leant them great character and intrigue. It’s a fascinating process and it produced a fascinating salad.

Oh, and Whitney paired it with a wine that was unforgettable–the best rose I’ve ever had (an unfiltered kind) called Vinya Sanfeliu that kind of tasted like watermelon: 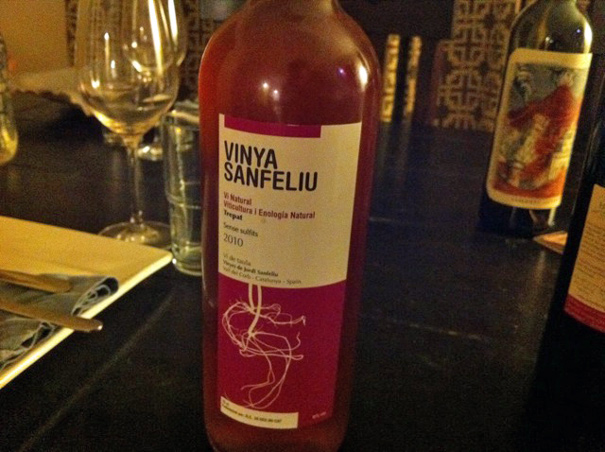 (For the rest of the wine pairings, go to Whitney’s post!)

Next up was the dish that blew all of us away, truly: Mac ‘n’ Cheese Stuffed Ravioli with Butter-Poached Lobster and Peas.

Here’s a picture that Andy took in his kitchen of the ravioli pre-boiling: 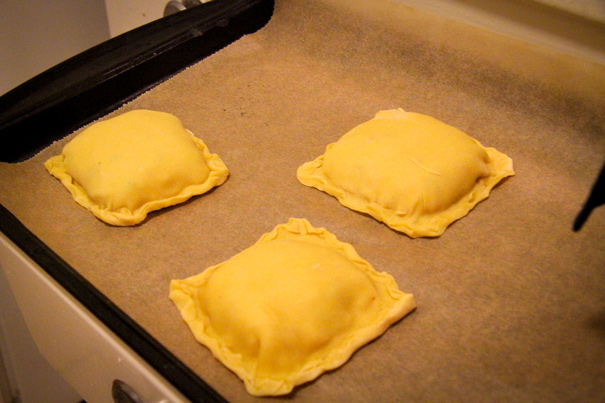 The idea came to him in a conversation where someone threw it out there, jokingly, and Andy said: “I’m totally going to make that.”

And make that he did; he even served it in bowls that he made himself: 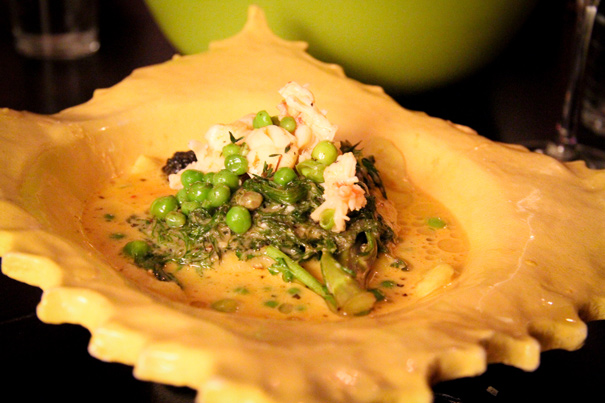 What’s so remarkable here, though, isn’t just the concept (which is certainly attention getting). It’s how Andy elevated the concept: he used a lobster that he bought at the farmer’s market which he then butter-poached based on Thomas Keller’s recipe. He used the shell to flavor the sauce and served it with broccolini and peas. And each bite, though potentially overwhelming, was balanced and nuanced (the cheese in the mac–jack, sharp cheddar, smoked gouda) played off the cheese in the sauce (sheep’s milk feta) and the results were dazzling but not at all too heavy. Here’s a look inside, in case you’re curious: 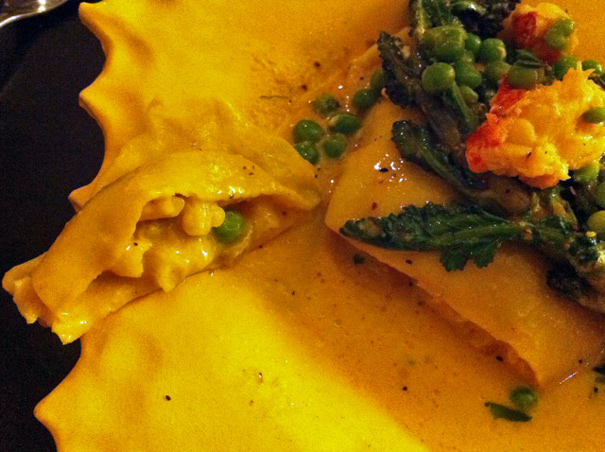 After that, a bomb dropped: there was more food to come! And this next course was even more dazzling than the last: Coq Au Vin Chilaquiles. 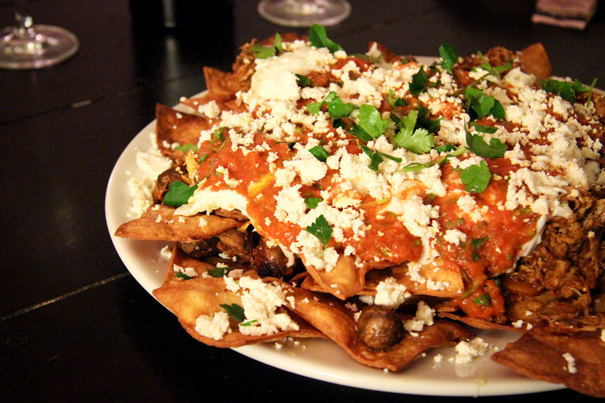 As Andy explained at the table, “Coq au vin is just braised meat” and isn’t it a fundamental part of Mexican cuisine to serve corn tortillas with different braised meats (goat, beef, tongue)? Only here, it’s a mash-up with French culture and the real kicker is: Andy fried his corn tortillas in duck fat. And the results were the most remarkable corn chips I’ve ever tasted. Crunchy, rich, salty and a great vehicle for the expertly made coq au vin (and salsa) on top.

Of course, everyone had to take their pictures first: 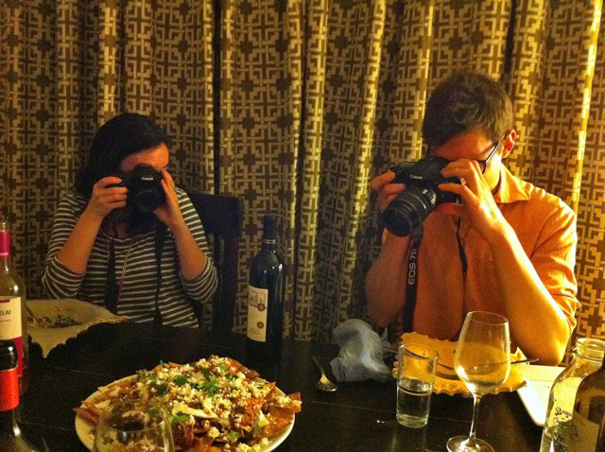 Believe it or not, there was dessert–but Andy relented a little and didn’t go too over the top. He simply made (simply made, ha) a brioche which he baked for us while we were eating our chilaquiles, so it came out hot and buttery: 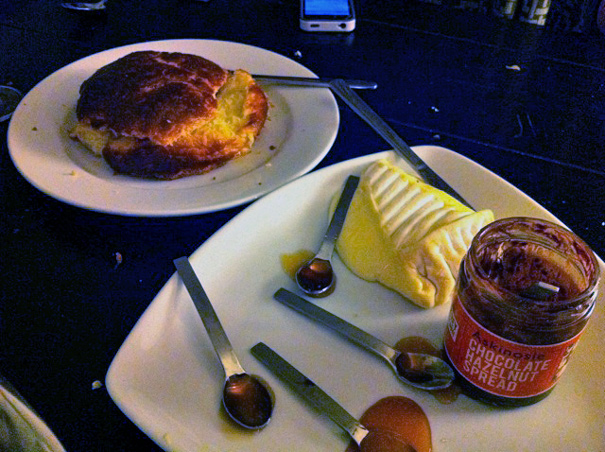 He served it, as you can see there in my dark iPhone picture, with brie, different kinds of honeys (one was from Serbia!) and a chocolate hazelnut spread from Askinosie chocolate.

All-in-all, this was such a brilliant meal–it revealed so much talent–it’s astonishing to me that Andy is both: (1) self-taught; and (2) only 25 years old.

I told him he has two choices for his career. He could open up a place like Kenny Shopsin (maybe a gourmet diner?) and serve his inspired creations to loyal, local fans, who line up on weekends for his signature dishes; or he could go the elevated route and do his time staging for chefs like David Kinch at Manresa, Daniel Patterson at Coi or Dan Barber at Blue Hill–all of whom would get a kick out of Andy and help him take his skill to the next level.

Molly Stevens has long been one of my favorite cookbook authors. Her All About Braising book turned me into a passionate braiser; and her new All About Roasting book led me to oven-roasted hamburgers and slow-roasted herbed turkey breast. So imagine my surprise and delight when she e-mailed to say that she’d be in L.A. cooking dinner at a really cool venue called Elysian. I immediately signed us up.

This may have been the best dinner deal in the history of the world: for $35 a person, you got a three course meal cooked by Molly PLUS you could B.Y.O.B. What could be better?

There, in the entryway, were Molly’s books laid out: 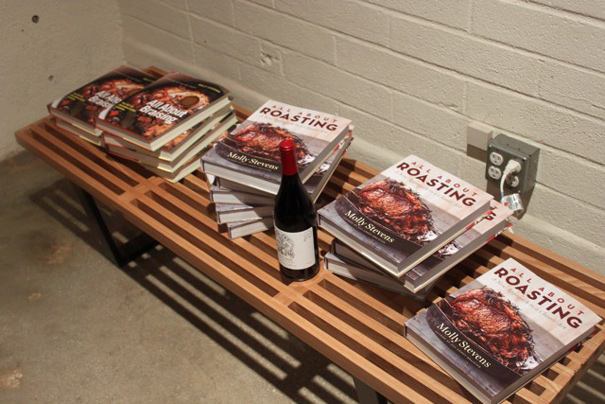 It was like seeing old friends at the door. And then, sure enough, there was Molly in the kitchen; we instantly recognized each other (she blurbed my last book, which is how we started corresponding) and we hugged and talked about the meal she was cooking and her time in L.A. so far. Then I pulled myself away so I could let her get back to it. I mean, this woman had serious meat to tend to: 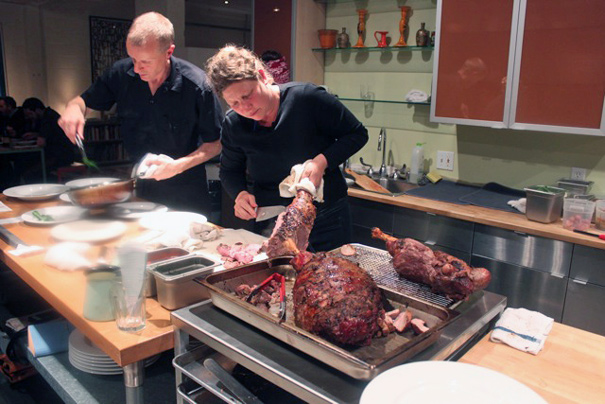 (FYI: that’s not Molly carving the lamb there; but the man, I’m pretty sure, is David Thorne the creative director of Elysian who, from his profile, seems like a totally fascinating guy.)

Here’s the scene at Elysian, when you walk in: 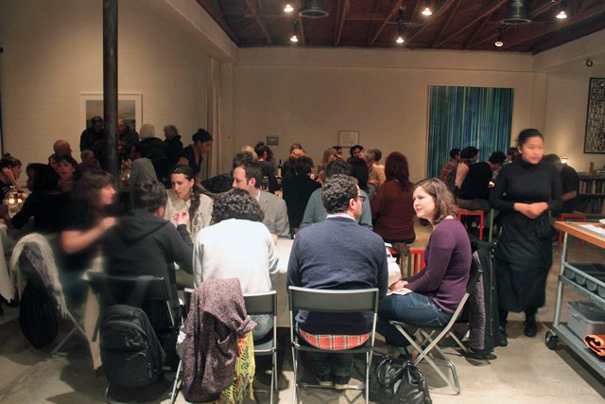 Yes, those are our friends Mark and Diana at the table. When we joined them, there was bread, butter and roasted almonds for us to snack on: 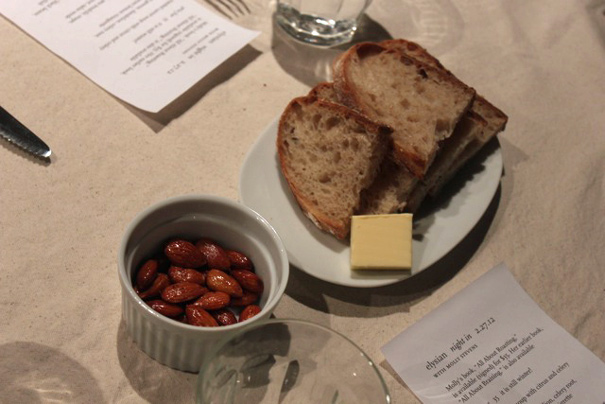 As for the menu, there were two choices in each category except dessert: you could start with either a soup or salad (we all chose the soup); for your entree you could have lamb or pork (Craig chose lamb, I chose pork) and for dessert there would be a tart.

Even though I normally advocate trying both things in any category on a menu, I’m glad that I had a whole bowl of Molly’s roasted carrot soup with citrus on the side: 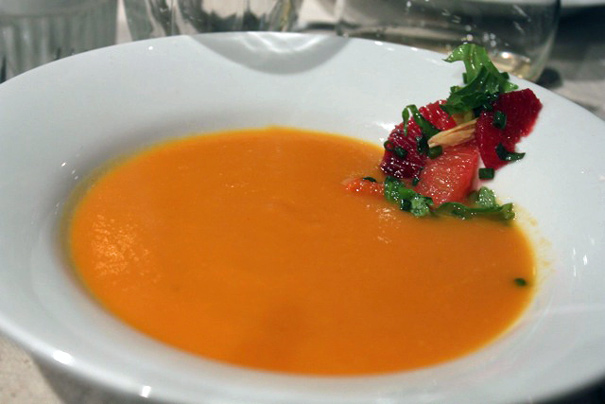 Sometimes the simplest things can be the most pleasing: and here was a big bowl of comfort, with the surprising addition of blood oranges on the side. I loved how creamy the soup was without being too rich; and I loved the intense, roasted carrot flavor.

Now, in reality, both Craig and I wanted to order the lamb; but the waitress suggested (wisely) that one of us order the pork and the other order the lamb. Only Craig said to me, “I’ll give you a bite of my lamb, but I’m not doing half and half.” That was a cruel thing to say, especially because I was craving lamb, but I ordered the pork just to be diplomatic.

And I don’t regret it because this pork loin was incredibly moist and flavorful: 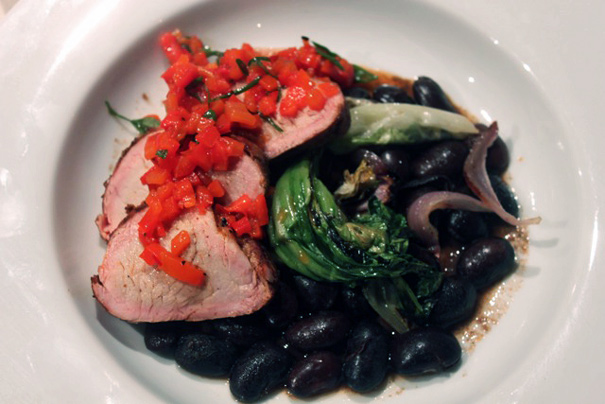 And what a presentation! Giant black beans on the bottom, escarole in the middle, and some kind of red pepper salsa on top. Now that’s what I call a pork dish.

Though Craig’s lamb dish was pretty sexy too: 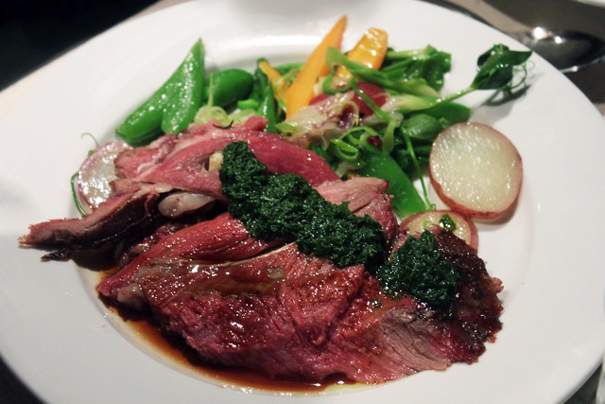 And to think that this entire meal cost $35 when that lamb dish alone would cost $35 at an upscale restaurant reveals how wonderful an event this was.

For dessert, there was a simple pear tart with whipped cream: 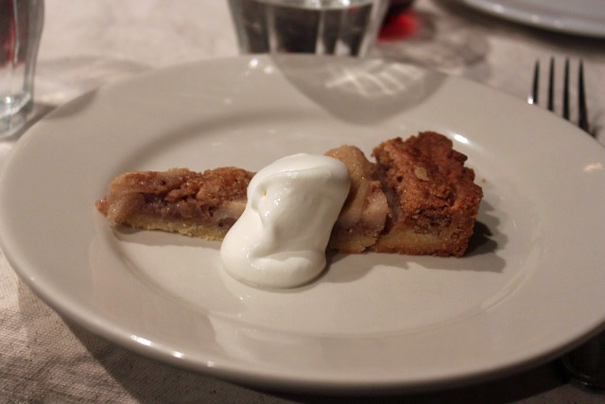 But the biggest treat is that Molly–who was done cooking–came to join our table with her nephew (Connor? Colin? Correct me in the comments!)–who lives in L.A. Here they are watching us devour our tarts: 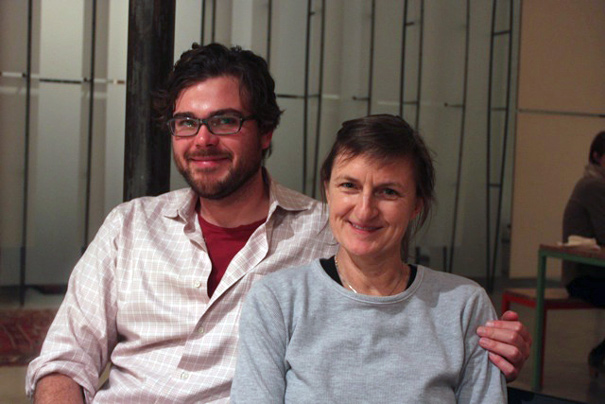 Molly and I talked shop for a bit–the business of cookbook writing/selling/promotion–and also talked food. And movies. And L.A. It was a delightful end to a delightful evening (and I can’t wait to go back to Elysian for their next event.)