Why Cookbooks Are Here To Stay 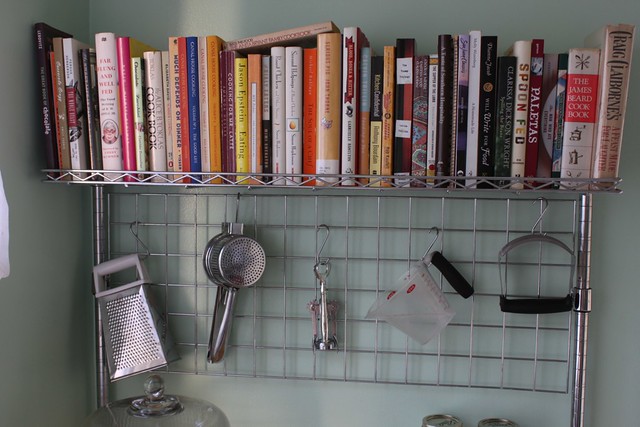 There’s a lot of talk these days about the future of cookbooks. On Eater National, yesterday, Paula Forbes made the case that “the end of print is in clear sight” and that the only cookbooks that might survive are the “art object” cookbooks, those “huge, photo-heavy tomes.”

Maybe I’m naïve, but I find this hard to believe. The end of cookbooks in clear sight? But I love cookbooks! And as excited as I am to try out Dorie Greenspan’s new iPad app (which involves video demos for over 100 recipes) and Grant Achatz’s “Next” eBook (which is designed exclusively for the iPad), does that mean that I’d ever abandon print cookbooks in my kitchen? Not a chance!

Cookbooks aren’t just vessels for information, recipe containers that serve a purely functional purpose. The best cookbooks transcend their function—they become indelible objects, beacons of inspiration. Whether it’s the red and white paper cover to “Mastering The Art of French Cooking” or the sandy, earthy cardboard-like cover to “Chez Panisse Cooking,” one touch and I’m instantly sucked up into a different world, a different perspective, a different philosophy about life and food.

Sitting in a chair with a cookbook, or lying in bed with a cookbook before drifting off to sleep, you’re not numbed by the hollow glow of a screen. You’re holding real words printed with real ink on to real pages. Often those pages are stained with sauces and soups from recipes already ventured; and those stains enliven those books with real-world wisdom and experience. They give those books personality, a sense of having been used and loved.

Holding a cookbook, you feel its weight, you feel its heft. On an iPad, you won’t physically feel the difference between Thomas Keller’s “French Laundry at Home” and Elizabeth David’s “Italian Food,” but in the real world the feel of those books tells you a great deal about each book’s scope and the author’s attitude about the recipes the book contains (in one case very intricate and formal, in the other case very personal and casual).

Great cookbooks understand their role as objects. The materials used to create great cookbooks are considered with as much seriousness as the ingredients that go into the book’s recipes. Will the pages have a matte finish? Will the pages be glossy? Will it have a hard cover, a soft cover, something in between? Will the book stay open when you spread it out on the counter or will it snap shut, forcing you to weigh it down with a box of Morton’s coarse Kosher salt?

These things matter because a beloved cookbook functions in the kitchen the same way that a beloved piece of cooking equipment—whether a box grater or a rolling pin—functions too. We reach for it knowingly, aware of how to hold it, how to flip through the pages, how to find the recipe for chocolate chip cookies in Martha Stewart’s “Baking Book” (something that I plan to do this afternoon). Martha’s “Baking” book is one that I have to weigh down with a salt box (sometimes I use my sharpening stone too) and it’s also a book that’s heavily stained. If you said to me, “Adam, wouldn’t it be easier to get that book for your iPad so you can just type in ‘chocolate chip cookies,’ have the recipe there whenever you need it, and get rid of that giant, crusty tome?” I’d look at you like you were crazy.

And I suppose it comes down to this:

There are those who believe everything in this world must have a clear and obvious function and those who enjoy things for the parts that aren’t so obvious. It’s the difference between reading a non-fiction account of whale hunting and reading “Moby Dick.” For some, the latter is the most tedious task imaginable; for others, the former would be soul-deadening.

So it is with cookbooks. For those who see cookbooks as purely functional, it’s natural to imagine that they’d work just as well—if not better—on an eReader or an iPad. But for those of us who love cookbooks for reasons that aren’t quite so tangible—and I imagine (and hope) that there are many of us out there—it’s impossible to believe that they’ll ever go away.