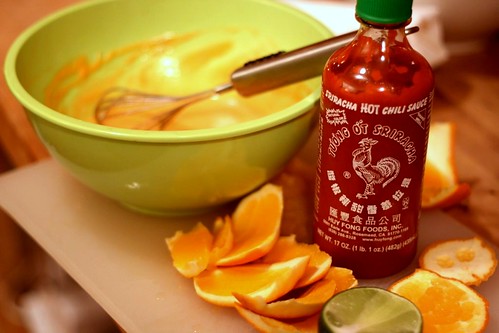 The first time that I heard the word Sriracha, it was on an episode of “Top Chef” where the chefs tried to make Sriracha ice cream. Even though I’d been eating Thai food since college (at Doc Chey’s Noodle House in Atlanta) and I’d seen the red bottle on the table with the rooster logo, I didn’t know the name of the sauce that it contained.

But Sriracha, a spicy emulsion of chilis, garlic, and vinegar, is prized by chefs all over. You can find it in most speciality stores (Whole Foods has it in the international aisle) and if you squeeze a bit on to your take-out Chinese food or Thai noodles, you’ll punch everything up into the stratosphere. Your mouth will cry: “Oh baby.”

It’s not a shock, then, that when New York Times food critic Sam Sifton chose his favorite restaurant dishes of 2010, one of those dishes featured Sriracha.

The dish, from Jean-George’s restaurant The Mark, featured four “perfectly cooked scallops” (according to Sifton’s audio) with a sauce that “only an uncouth person would call a mayonnaise but–basically–a mayonnaise.”

Call me uncouth then because when I read the list of ingredients that went into said sauce–egg yolks, Sriracha, grapeseed oil, kombu seaweed water, orange and lime juice–I knew (with the exception of the seaweed water) I could easily recreate this sauce at home and call it Sriracha Citrus Mayo.

Here’s how I did that. Into a bowl? Two egg yolks and a big squeeze of Sriracha: 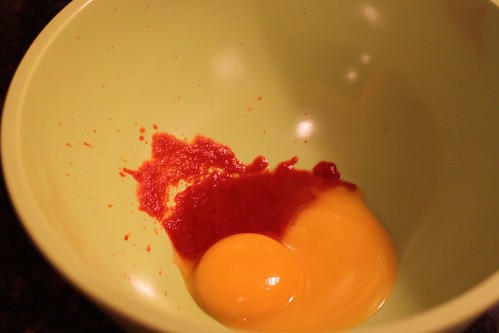 I considered adding orange and lime zest to this base, but I resisted. Next time, I might try it.

I added a pinch of fine salt (nothing coarse) and then, steadily, I whisked in canola oil (I didn’t have grapeseed handy. Again, I’m uncouth.)

I whisked and whisked and added the oil drop by drop until I had a very thick mayonnaise. It took about 1/2 to 3/4 cups of oil. (Once it’s thick you can add the oil in more of a steady stream.)

At this point I tasted and it wasn’t punchy enough so I squirted in more Sriracha. I tasted again and wham-pow, that was good.

Then, simple: I squeezed in orange juice and lime juice and that thinned the sauce out but gave it great citrus flavor. There I had it: Sriracha Citrus Mayo.

Truth be told, my real goal was to recreate the Jean-Georges dish that Sifton rhapsodized so eloquently about. Only I shot myself in the foot buying my scallops at Gourmet Garage. At Gourmet Garage, they sell those chemically treated scallops sitting in liquid that will never get brown no matter how hot your pan and how thoroughly you dry them. (Next time, I’m headed to Citarella for dry scallops that’ll brown up beautifully.)

So here are my sad scallops in the pan: 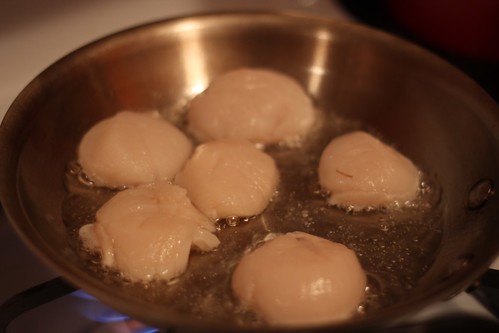 And here’s my finished dish: 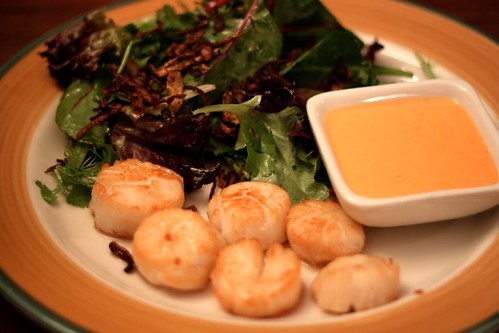 I served it with a salad dressed with some of the leftover orange juice, lime juice, olive oil and some fried shallots for a little crunch.

The star of the show, however, was definitely the Sriracha Citrus Mayo which I dunked those scallops in so thoroughly, it didn’t matter that they were barely brown.

It’s a sexy sauce and perfect, I think, for roast chicken, deviled eggs, or spreading on your turkey sandwich. The possibilities are endless; just look for that red bottle with the rooster on it. And if someone asks what you’re buying say, in a saucy voice: Sriracha.