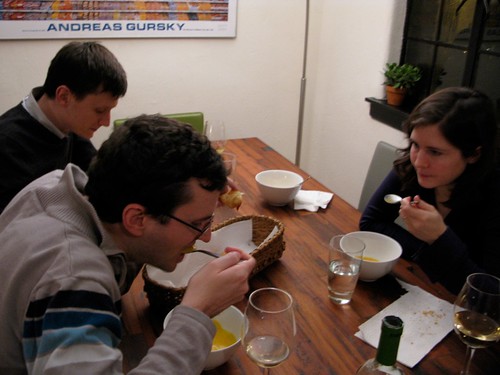 Hear those distant drums? A great battle is about to begin: the Great Soup Battle of 2010.

As readers may remember, last week I announced a big contest on my blog. Submit your favorite soup recipe–it didn’t have to be original, just a soup recipe that you love–and the best one would win a $450 VitaMix blender. Then 325 of you, that’s right 325 of you, submitted recipes. And little old me had to wade through them to pick the best. It was hard work, not for the faint of heart, but I wound up choosing the three most intriguing; recipes that, for whatever reason, grabbed my attention and made me hungry to try them. Then I invited my friends Diana Fithian (an enthusiastic home cook) and Leland Scruby (who works at the French Culinary Institute) over to help me make them. The three of us, plus Craig, would sample these soups and carefully choose the winner.

First, Leland, Diana and I had to choose which soups each of us were going to make. Here’s Leland and Diana surveying their options: 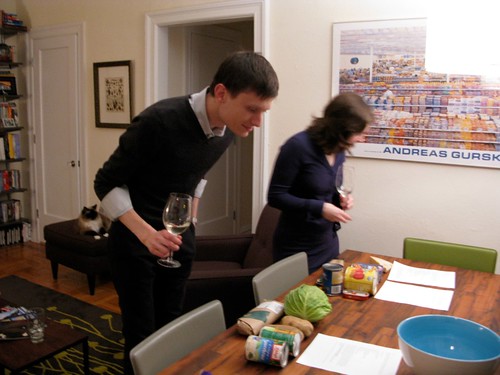 Leland selected the first option, Italian Pasta and Bean Soup (Pasta E Fagioli) submitted by Allen Small. [Note: all recipes will be posted at the end.] 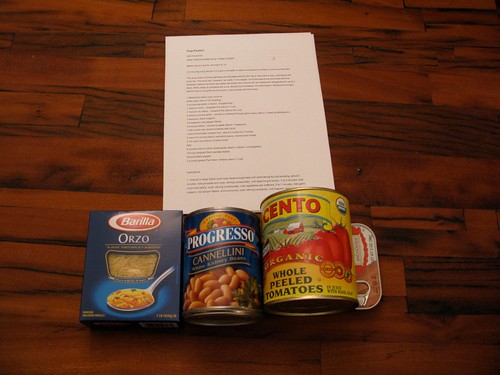 I chose that recipe for the top three because of the intriguing combination of pancetta (or slab bacon) and anchovies; plus the recipe tells you to put a Parmesan cheese rind in with the soup as it simmers. I just had to know what that would taste like. 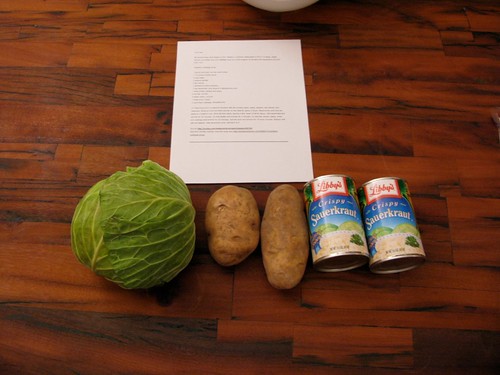 This recipe fascinated me for many reasons, mostly the combination of simmered pork butt and sauerkraut. What would that taste like? Again, I just had to know.

Finally, I chose the Szechwan Carrot Soup submitted by Mira. 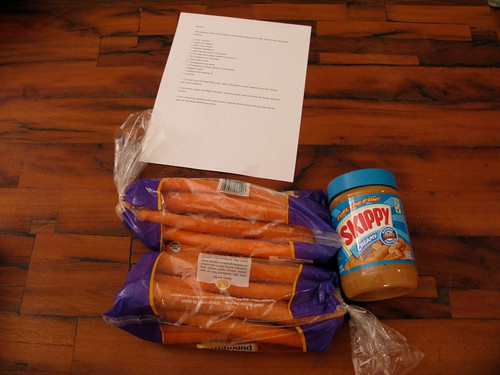 This was the simplest of the bunch, but no less exciting. You simmer carrots with ginger then blend them in a blender with peanut butter, soy sauce and sesame oil. Wouldn’t you want to know how that would turn out?

We immediately got to cooking: 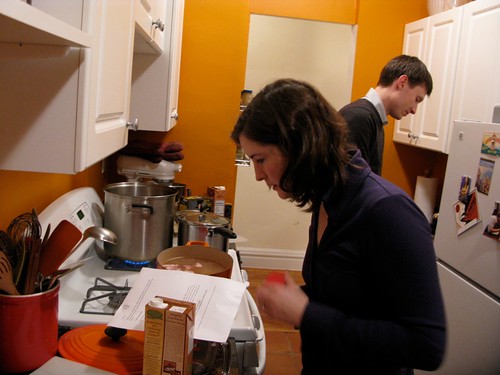 Here’s Leland’s work station. Notice how organized he is; organization is one of the most useful things he learned as a student at F.C.I., he told us. 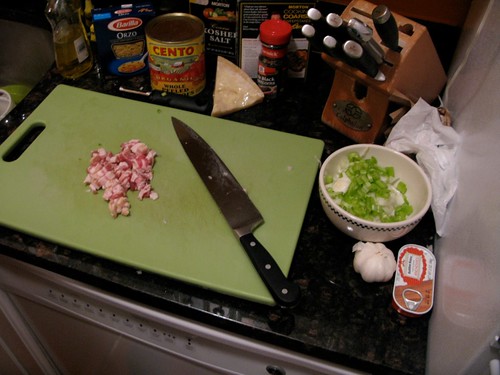 Into the pot went the bacon and the veg: 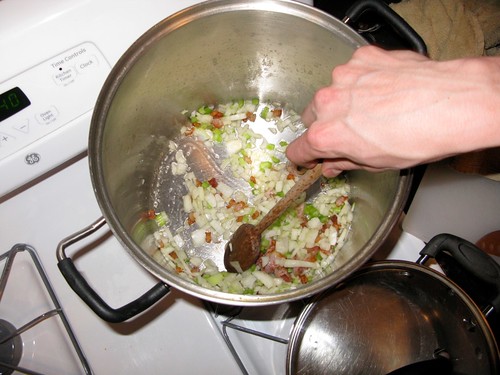 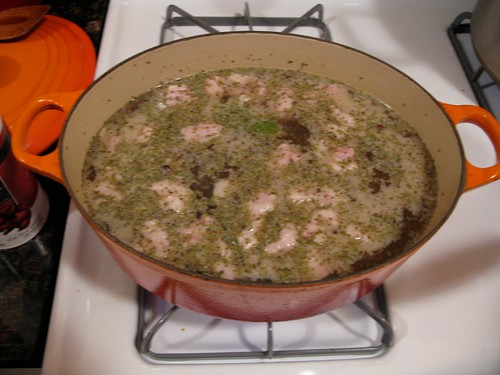 As it simmered, the smell from the bay leaves were particularly intense; almost foresty in their pine-i-ness.

Meanwhile, I cut up my carrots and ginger: 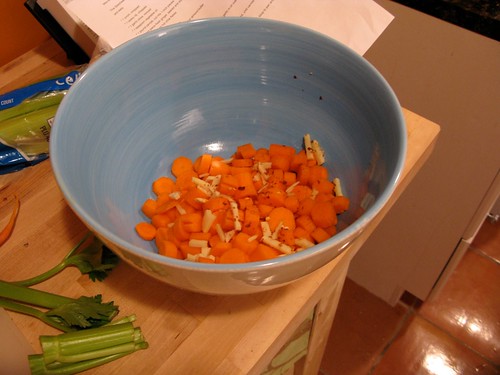 And got them simmering with the stock: 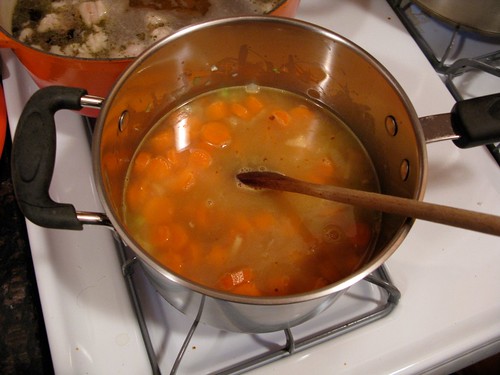 Here they are, the three soups going at once: 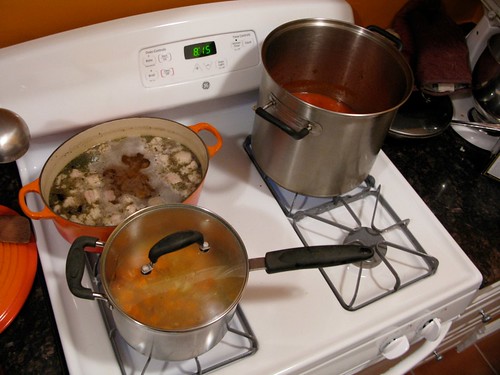 Leland’s was ready first. He removed the Parmesan rind: 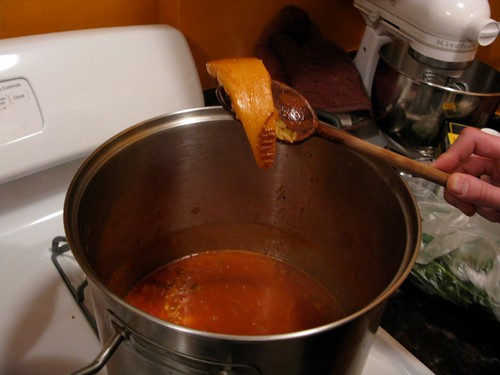 And served up four beautiful bowls of this: 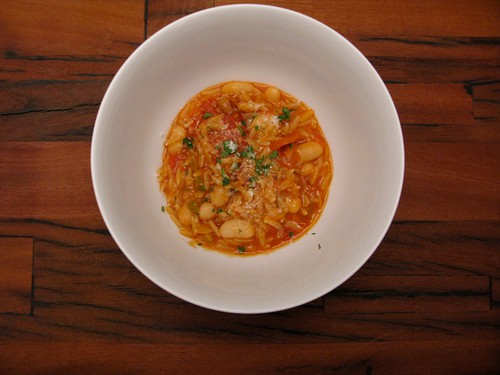 Isn’t that gorgeous? In there you’ll see cannellini beans, orzo, parsley, tomatoes, and Parmesan cheese grated on top; plus the bacon and anchovies that provided the flavor base.

We all ate the soup thoughtfully, considering its merits (which were many: flavorful, hearty, fresh-tasting) and its flaws (which were few; in fact, I can’t think of one): 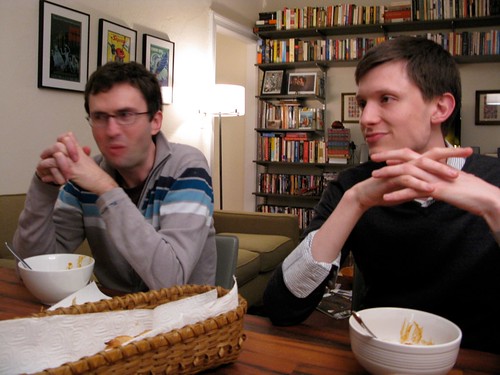 Then it was my turn up to bat. I took my softened carrots (it took longer to get them soft than the recipe said; though my heat was pretty low, so I raised it a smidge ’til I could smush them against the side with a spoon): 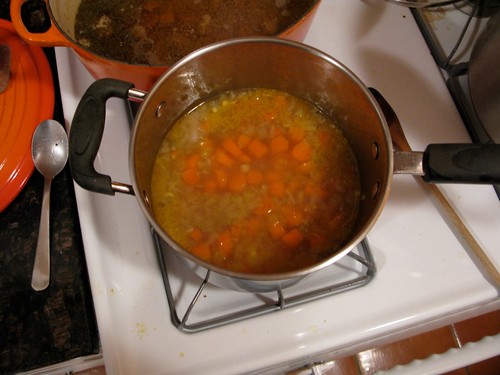 And poured the whole mix into a blender. To that I added the soy sauce, the peanut butter (just 1 1/2 Tbs), sesame oil and one cup of milk: 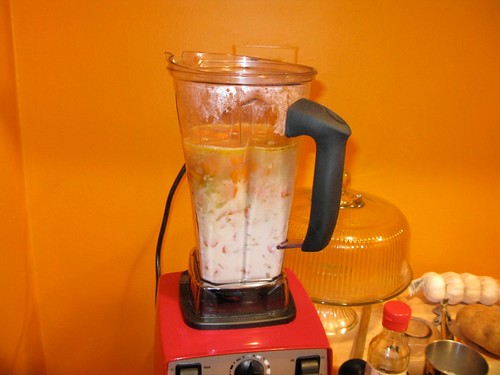 Here I am blending. Wheeeeeeeee! 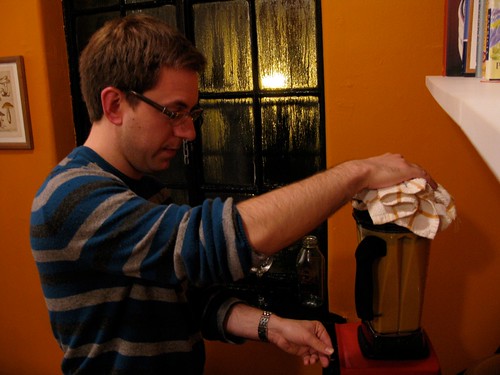 And this, the finished soup: 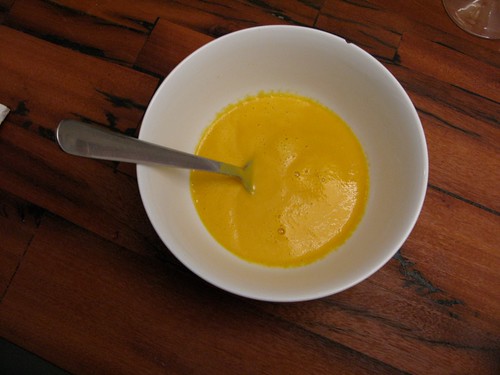 In terms of presentation, there was a nice sheen to it; though, if I had to do it again, I’d top it with chopped peanuts and cilantro (for texture and a nice herbal note) plus, maybe, a squeeze of lime.

We all sampled the soup: 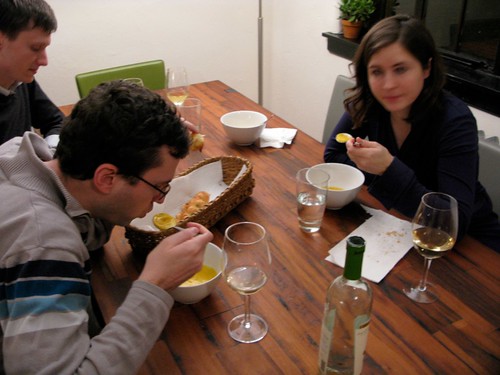 Look how delighted Diana is by it; there was definite heat from the ginger and also another hot ingredient, red chile flakes. The peanut butter made it creamy, the soy sauce salty; it was nicely balanced.

Finally, it was Diana’s turn to serve. Here’s her soup after she added the sauerkraut and the cabbage and the potato: 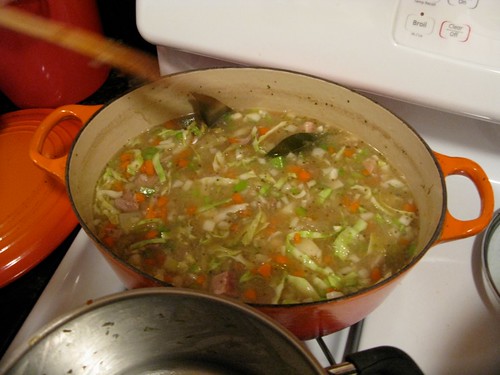 And, at last, her finished bowl: 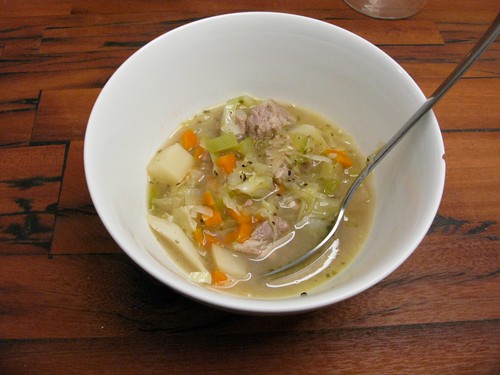 You’ve gotta admit, you want to eat that. And the taste? The taste was insane. Vinegary from the sauerkraut and meaty from the pork butt; we all ate this with excited looks on our faces.

But which was the best? Would we each choose the soup we ourselves made? How would we not succumb to peer pressure or sheer self-interest? There was only one answer: secret ballot. 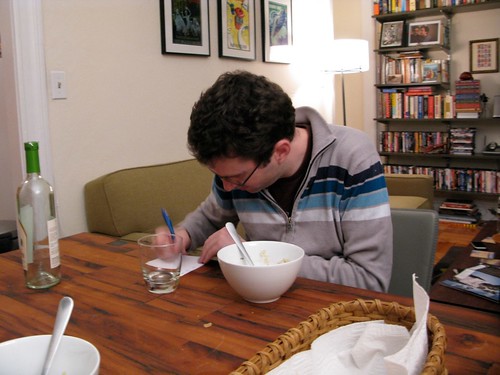 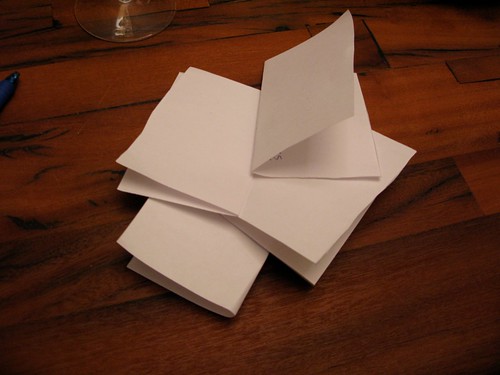 And, finally, the results: 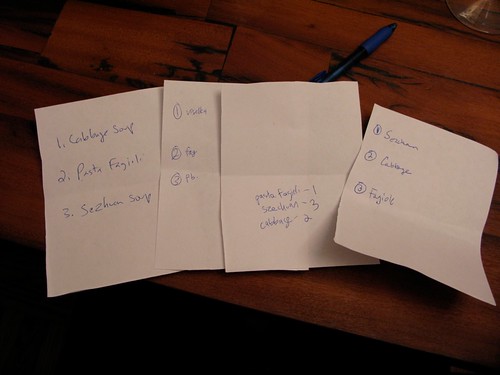 Can you read those? Probably not. But here’s the exciting thing: every person’s soup was voted #1 on someone’s ballot. But only one soup got two #1 votes and guess whose soup that was? 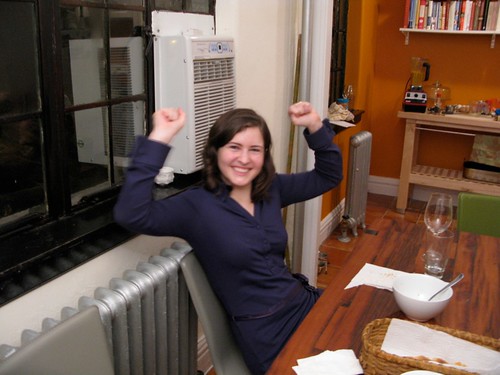 Indeed, I personally voted that soup #1 because of the magical and unexpected combination of flavors. It’s a soup unlike any soup I’ve had before; complex and tart and rich. Diana confessed that she added a little butter at the end to make it a little less wholesome and some might call that “cheating” but, even if that’s cheating, the bowl of soup she made was my favorite, with the fagioli a close second (the presentation of the fagioli takes top marks), and the Szechwan (which was definitely the most zippy) a close third.

Thanks to everyone who submitted a recipe, this was lots of fun. And congratulations to Youri: I’ll be e-mailing you shortly and you have a $450 VitaMix blender in your future. Nice work! And now, the recipes.

This Szechwan Carrot soup is based on an epicurious recipe and it is killer – smooth, rich, unexpected and easy.

1. In a large heavy saucepan cook onion, celery, and garlic in oil over moderately low heat, stirring, until onion is softened.

3. Stir in remaining ingredients and purée mixture in batches. Return soup to pan and heat over low heat until hot, being careful not to let boil.

I’m not a big soup person (I’m more a chowder or stew kinda person) but this is one of my favorites!

This soup does not hold well because the pasta absorbs the liquid, becomes mushy, and leaves the soup dry. The soup can, however, be made in two stages. Once the beans are simmered with the tomatoes, before the broth and water are added, the mixture can be cooled and refrigerated for up to 3 days. When ready to complete the soup, discard the Parmesan rind (otherwise it will become stringy), add the liquid, bring the soup to a boil, and proceed with the recipe.

1 (28-ounce) can diced tomatoes with liquid

1. Heat oil in large Dutch oven over medium-high heat until shimmering but not smoking, about 2 minutes. Add pancetta and cook, stirring occasionally, until beginning to brown, 3 to 5 minutes. Add onion and celery; cook, stirring occasionally, until vegetables are softened, 5 to 7 minutes. Add garlic, oregano, red pepper flakes, and anchovies; cook, stirring constantly, until fragrant, about 1 minute. Add tomatoes, scraping up any browned bits from bottom of pan. Add cheese rind and beans; bring to boil, then reduce heat to low and simmer to blend flavors, 10 minutes. Add chicken broth, 2 1/2 cups water, and 1 teaspoon salt; increase heat to high and bring to boil. Add pasta and cook until tender, about 10 minutes (refer to package instructions to better estimate pasta cooking time).

My favorite soup (and recipe) is from Veselka, a Ukranian restauarant in NYC! It is tangy, meaty, flavorful and better than any cabbage soup you could imagine- it’s all about the sauerkraut and pork butt! Yum!

1 cup sauerkraut, plus around 4 tablespoons juice