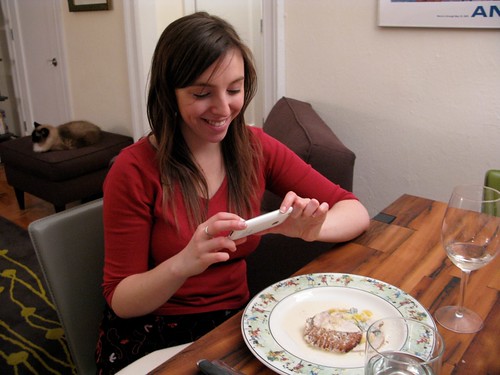 My friend Clotilde Dusoulier, of the legendary food blog Chocolate & Zucchini and author of several notable food books (including her own cookbook, a guide to Paris and the book she recently translated, the French Joy of Cooking, “I Know How To Cook”) was coming to dinner.

I’ve spent lots of time with Clotilde, we’ve dined together several times in New York (at Babbo and the Corner Bistro and Dirt Candy) and in Paris (at Ze Kitchen Galerie) but we’d never cooked for each other. And considering that she grew up in France, where dining and food are such a deep part of the culture children aren’t just born with silver spoons in their mouths but an entire set of flatware, and I grew up on Long Island and in Boca Raton, Florida where fine dining is limited to the salad bar at the golf club, I knew I was in serious trouble. How could I impress Clotilde? What if she spit her food out into her napkin in disgust? How would I live this down? Would she ever want to see me again? This was the most terrifying dinner guest of all time.

Luckily, I had a plan. The plan was called: “Get Everything Done Way Ahead of Time So That When She Arrives She’s Impressed By Your Calm, Grace and Ease Around The Kitchen.”

I decided to cook a menu of favorites rather than experiment with anything new. And, clearly, I couldn’t cook French food for a Frenchwoman. So I turned to one of my favorite food books of all time, Amanda Hesser’s “Cooking For Mr. Latte.” That book contains my favorite dessert recipe of all time, Amanda’s mother-in-law’s almond cake. So I knew I’d make that for dessert and then, for the entree, I selected something unusual enough to grab Clotilde’s attention but comforting enough to warm her up on a cold winter’s night: milk-braised pork.

The milk-braised pork, which I’ve made once before (click here for the recipe), is a nice dish for a situation like this because you make it ahead, refrigerate it, and then–when the guests arrive (or, in this case, the guest)–you pull out the meat, slice it, warm up the sauce and add the meat back to it so everything gets heated. Here, in the foreground, are the basic ingredients: 20 cloves of garlic, lemon peel from 3 lemons, 20 sage leaves and 3 Tbs of butter: 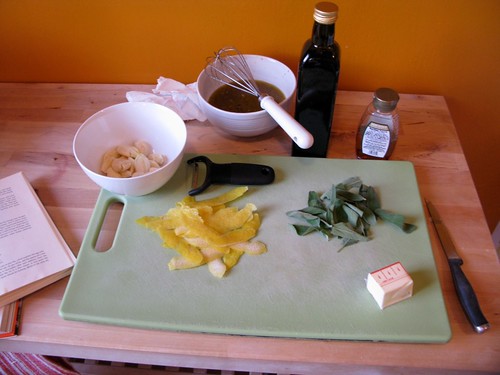 You brown the pork (a boneless loin which I bought from my new favorite butchers, Ottomanelli’s on Bleecker Street) and, in another pot, bring milk, cream and half-and-half to a boil: 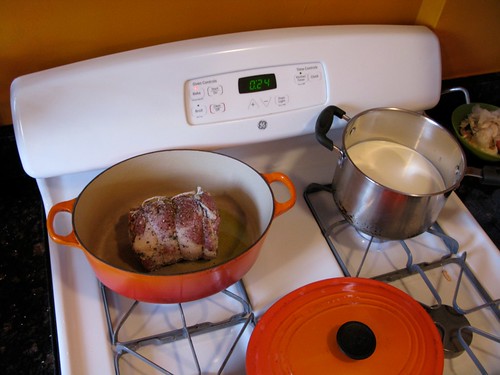 You turn the heat off the milk, remove the meat once browned (it takes a good 20 minutes to get all the sides perfectly brown), add the butter and the garlic, then the sage, then you lower the meat back in and cover by 2/3rds with the hot milk mixture, adding the lemon peel at the end. You partially cover and simmer until the internal temperature reaches 140.

At that point, you turn off the heat, let it cool and refrigerate until Clotilde arrives. (Assuming she’s your dinner guest too.)

For a starter, I decided to make Michael Symon’s beet salad from “Live To Cook.” It’s not a revolutionary recipe by any means–it’s golden and red beets slowly roasted, at 325, with garlic and thyme–and dressed with olive oil, orange juice and balsamic vinegar, then topped with toasted walnuts and blue cheese. But, if you keep the beets separate until the very end (otherwise the gold beets turn red), it makes for a lovely presentation. Here are the beets before and after roasting: 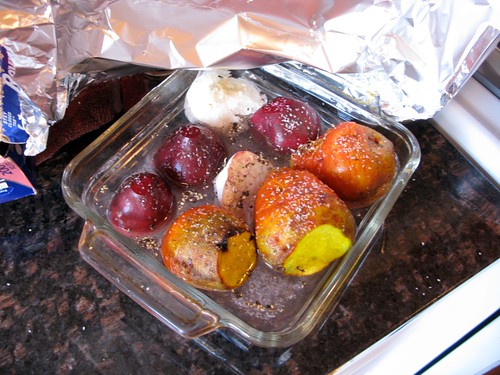 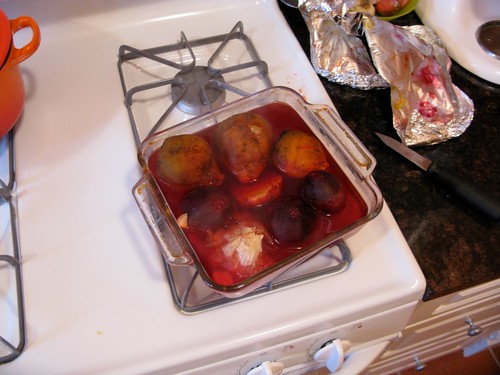 In case you’re wondering about the sequence, I made the almond cake the night before (Amanda Hesser says it actually gets better as it sits), I popped the beets in the oven before tending to the pork, while they roasted I braised the pork in milk, and then when they were out I peeled them, cut them into wedges and tossed them with a small amount of the dressing. I toasted the walnuts and chopped them and then cleaned everything up; by the time Clotilde arrived, everything was ready to go.

I think that’s what you want no matter who’s coming to dinner. I was, indeed, calm and relaxed when Clotilde knocked on our door; we popped open a bottle of Sauvignon Blanc and snacked on David Lebovitz’s snack mix and Blue Ribbon matzoh and spent lots of time catching up.

When the moment came for dinner, Clotilde and Craig took their seats and I entered the kitchen where I assembled the salad: layering golden beets with red beets, topping with the chopped walnuts and crumbled blue cheese. Look how pretty: 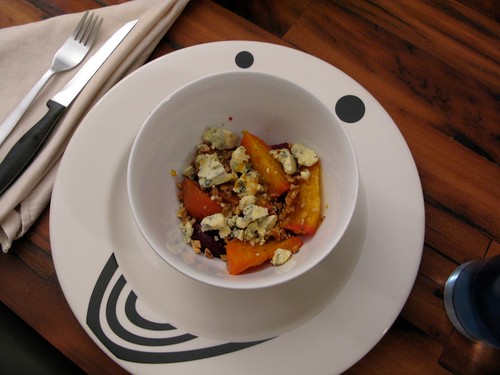 Even Clotilde took a picture. 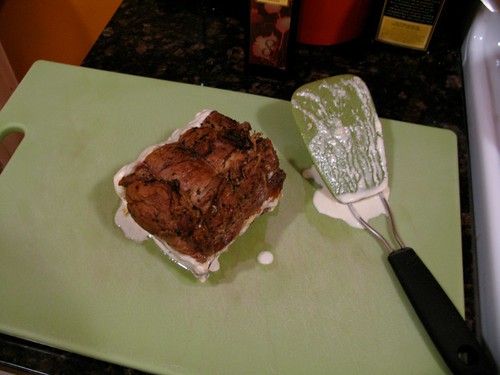 When I began to slice, I noticed something: the portion that sat out of the milk (just the top 3rd) was pretty raw. So I did some surgery and sliced the raw portion away and then only sliced the cooked part. If you make this recipe, my advice is to cover it better when it cooks and to rotate the pork around in the milk so it all gets cooked evenly.

That said, the dish was lovely, just like last time. Take a look: 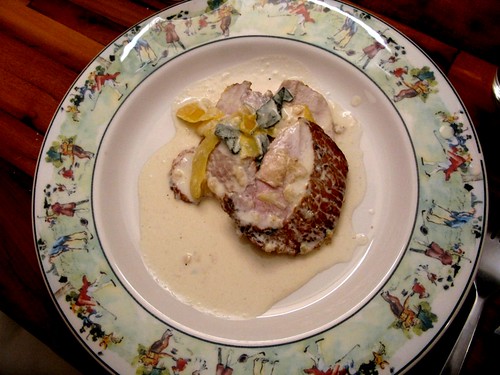 The milky part becomes a creamy sauce and the pork, cooked just to 140, is really tender and not at all dry. Everyone ate it eagerly. 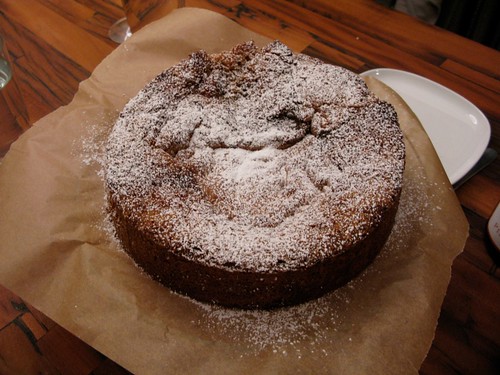 Clotilde loved this! She even Tweeted about it when she got back to Paris: “As soon as i recover from the jetlag i plan to reproduce the spectacular almond cake that @amateurgourmet made for me.”

And so, it is with great relief that I inform you that my dinner for Clotilde went off without a hitch. Every morsel was consumed, everyone left with a smile on their face. Well Craig and I didn’t leave, we live here.

Seriously, though, Clotilde is a charming dinner guest. She’s a delight to eat with and even more of a delight to cook for. I can’t wait to have her back again; maybe next time I’ll make her an all-American dinner of meatloaf, mashed potatoes and, for dessert, chocolate chip cookies. But it’ll be a very long time before I ever make her Coq au Vin; only a fool would try that.

A Pork Shoulder To Cry On (with Blue Potatoes)

Almond Cake in a Food Processor