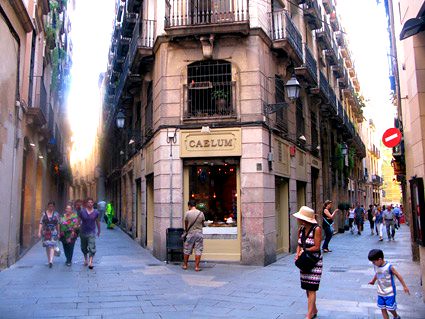 Before I left for Barcelona, two weeks ago, I created a three-ring binder of essential information. The first tab said “Hotels” and there I printed out the confirmations for the Hotel Banys Orientals, where we’d stay for most of the trip, and Hotel Coral Playa, where we’d stay when we went to Roses for dinner at El Bulli. (Note: both hotels were great choices, thank you all for your tips.) The second tab said “E-mails” and there I kept all the direct e-mails I received about where to go and eat in Barcelona. Tab three was “Comments” and I printed out all your comments from this post, highlighting the most commonly reoccurring restaurant suggestions, and then, in Tab Four “NYT,” I printed out profiles of those highlighted restaurants from the New York Times Barcelona page. Suffice it to say, I arrived in Barcelona fully prepped and ready.

All this planning certainly paid off–we ate extraordinarily well, almost every lunch and dinner of the trip (and don’t worry, you’ll be seeing pictures and hearing all about that quite soon)–but, I must confess, my favorite Barcelona moments had nothing to do with planning. They were the ones that happened spontaneously, the ones that took me completely by surprise.

For example, our hotel was steps away from one of Spain’s most beloved churches: the Santa Maria del Mar. On the plane to Spain, I read Robert Hughes’s book, “Barcelona: The Great Entrantress” (recommended to me by the kind people at my favorite book store, Three Lives in the West Village, who also recommended “The Shadow of the Wind” by Carlos Ruiz Zafon which I’m reading now.) Anyway, Hughes waxes quite lyrical about the Santa Maria del Mar—it was the people’s church, built in the 1300s, by workers and seafarers. A fire in the 20th century destroyed much of the decoration but actually (according to architectural scholars) improved the church, which now has a vast and beautiful interior. 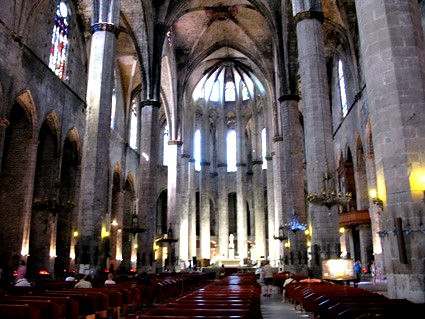 Every morning, we’d sit outside a pastry shop called Bubo (recommended by Barcelona reader Mar—more on her in a sec), sipping Cafe Cortados (macchiato-like drinks, suggested by David), gnawing at postres and overlooking the church. It was my favorite ritual of the trip: 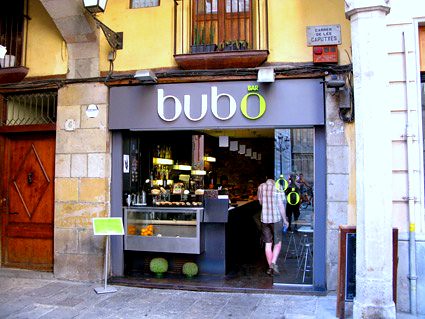 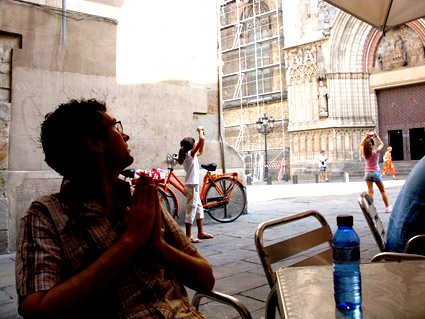 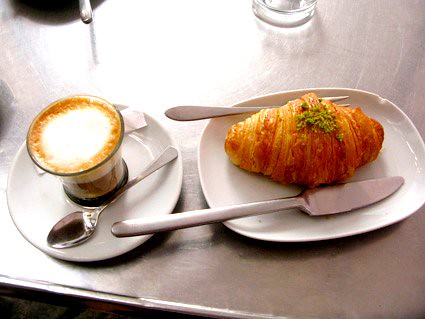 When we got back to New York and woke up extra early the next morning (one of the perks of going to Europe: on your return, you wake up early feeling great), as I headed out to the city I told Craig I would meet him at Bubo. Craig made a sad face and said, “Awwwww.”

Of course, on our trip, we visited all the obligatory attractions: Park Guell (which was so scorchingly hot, it was difficult to enjoy), the Sagrada Familia, Las Ramblas, and the Boqueria (which I thoroughly documented for a forthcoming post), but, again, the best experiences were the ones we weren’t fully prepared for. Case in point: Montjuïc. 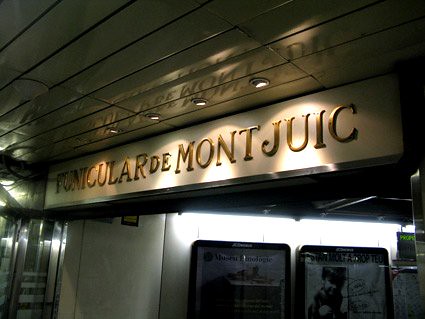 On the top of a mountain, or, rather a hill called Montjuïc (literal translation: Hill of the Jews) is a park so lovely, so beautiful that we couldn’t believe, on a Sunday afternoon, it was as empty as it was. We practically had the place to ourselves. 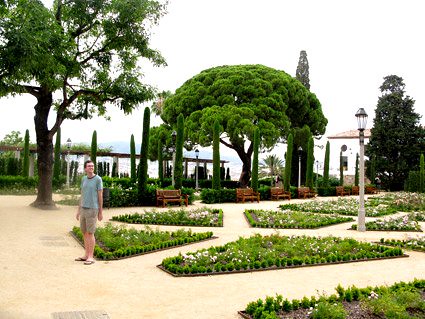 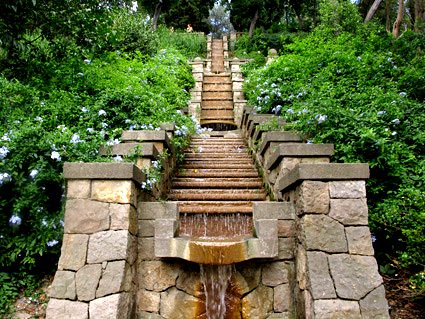 In our meanderings on the Hill of the Jews, we stumbled upon a British a cappella group performing American standards in front of a giant fountain. 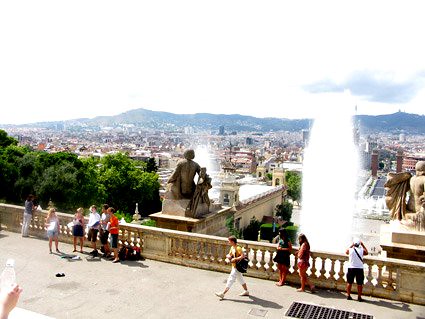 There, in the glaring sun, we ordered two frozen lemon drinks, and sipped them feeling very content: 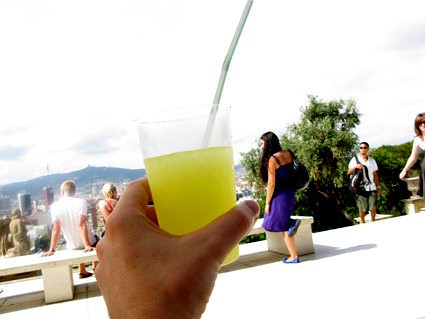 Another happy beverage moment, totally unplanned, came days later when we stumbled upon a Mojito bar alongside the Santa Maria del Mar. (If you’re facing the church, go left and up the corresponding alley. You can’t miss this pink palace of mojitos.) 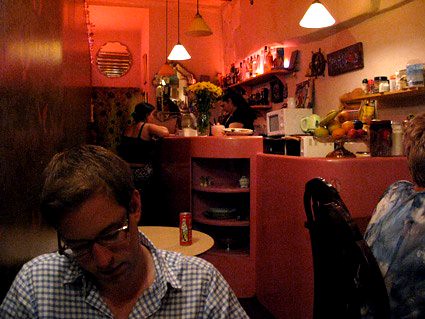 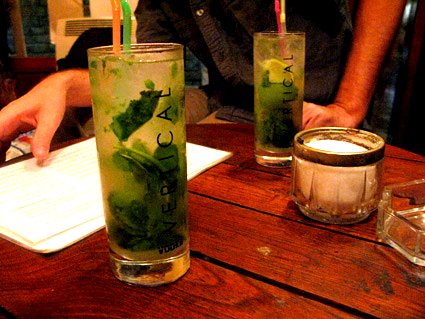 A little girl danced around for us and Barcelona teenagers made out on a couch. We felt like authentic Barcelonans patronizing the least touristy place possible.

And touristy places, it should be said, abound in Barcelona in July and August. Here’s a tip for visiting Barcelona: don’t go in summer. We had no choice because our El Bulli reservation was at the end of July, but if we didn’t have that particular constraint, and I knew what I knew now, we would’ve gone in October or in Spring. I recommend you do the same.

I also recommend–and this is my strongest recommendation, so take note–that you track down a local to really show you the ropes. We were very fortunate that a reader of my blog named Mar (no relation to the Santa Maria del Mar) offered to meet us on the Tuesday after we arrived to show us around and give us some Barcelona advice. We met her at Caelum, the place you see in the lead photo. You can make Mar out talking on her cellphone behind the woman in the hat.

Caelum is just the kind of place you need a local to tell you about. A former Jewish bathhouse (no, not that kind of bathhouse) from medieval times, the place now serves hot chocolate and pastries made by monks at various monasteries around Spain. Mar ordered for us a hot chocolate (which was more like scalding hot chocolate pudding) and a certain kind of cookie, the name of which escapes me (it’s something like malindros?) [Follow-up: according to Mar’s post, written in Catalan, they are melindros. Mar writes (can anyone translate?): “No, xurros no! Que a Barcelona prenem melindros, ni que siguin estranyament rodons!”) 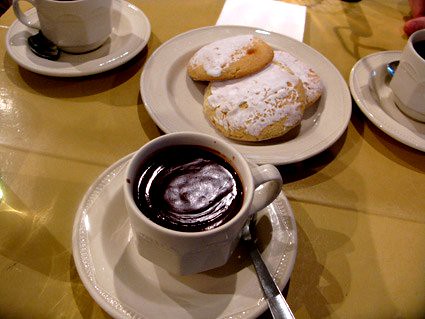 You dip the cookie in the scalding hot chocolate pudding and suddenly, despite yourself, you swoon and go back for more and more and more. In fact, I liked this experience so much I insisted that we repeat the Caelum experience long after our first experience with Mar. (Don’t miss Caelum on your next trip to Barcelona.)

Mar toured us around the Jewish ghetto (the basis for the Elvis song, “In The Ghetto”): 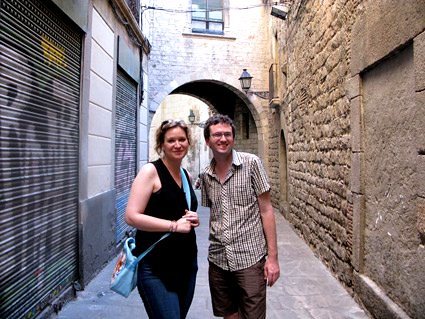 She took us to a comic books shop (she works in that field) and also to an adorable cheese shop, hidden in the Jewish ghetto, with a Scottish cheesemonger who speaks perfect Catalan and serves cheese that looks like breasts: 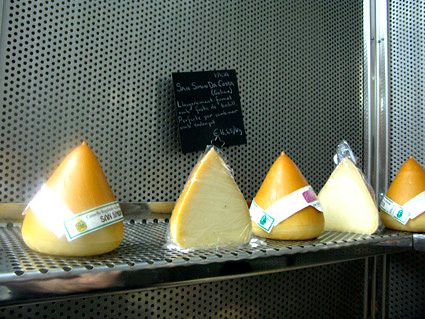 I realize looking at that picture now, that those breasts are quite alarming, but it was Mar who said it. Maybe it had something to do with nipples?

Soon, we parted ways with Mar (not before she reminded me of her most emphatic restaurant recommendation–one that she preferred to keep secret, but one I will secretly share with you here: it’s called Attica, and Mar says it’s got “the best ratio price/quality in Barcelona.” Unfortunately, after El Bulli, I had to file for Barcelona Bankrupcy and couldn’t justify a dinner there. But you should!)

So thank you to Mar for being such a stellar tour guide and such a wonderfully warm welcomer to your fair city.

I think, at this point, you’re getting the gist of my thesis: that the best moments of any trip are the ones you don’t envision before you go. Who could imagine we’d be dipping cookies made by Spanish monks into hot chocolate pudding in a former Jewish bathhouse with a Catalan reader of my blog? Or that we’d one day wander down an alley near our hotel and stumble up on a dry bean bonanza: 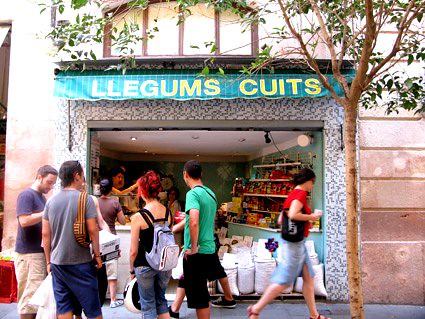 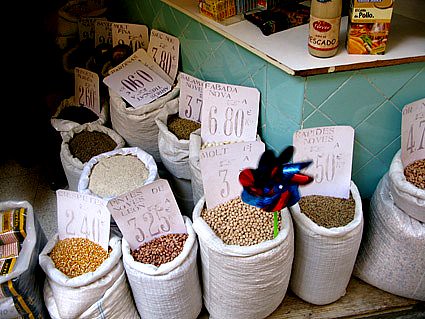 These experiences, the ones that weren’t foreshadowed by my three-ring binder, were the ones that made this trip to Barcelona so memorable. Robert Hughes has it right in his title: Barcelona is a great enchantress. When you go, you must toss aside your three-ring binder and let the city enchant you: making reservations is easy, wandering aimlessly takes skill. And, in Barcelona, that’s the only way to do it.