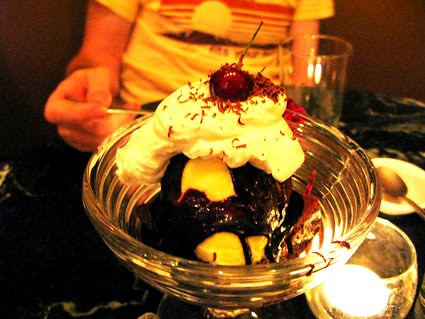 “What do we need that for?” asked my grandmother, and she had a good point.

You see my whole family, well most of my family–mom, dad, grandma, grandpa–came to see my Brooklyn apartment on Friday, and after a lovely lunch at Miriam (where we shared hummus and I ate an Israeli breakfast), I led my parents and grandparents across the street to The Chocolate Room. It was there that we ordered a brownie sundae and my grandmother protested. “It’s too much food,” she said, shaking her head disapprovingly.

And then it came. The waitress set it down and suddenly my grandmother was transformed; she lifted a spoon with profound determination and dove in with all her might. My whole family attacked at once and the dessert before us vanished in 0.33343 seconds. This proves something I’ve suspected for a long time: nobody can resist a brownie sundae.

My first brownie sundae experience of the summer occurred a few weeks ago, after making dinner at home. I’m pretty sure the dinner I made was a salad and I was feeling a bit too wholesome and healthy and so I said to Craig, “Let’s go to The Chocolate Room and have dessert.” Craig’s not a big dessert guy but he caved out of pity for me, craving dessert like I was, and so there we were, at a table for two, staring at the menu, and I said the words “brownie sundae” and that was that.

The brownie was hot. The ice cream was cold. The chocolate sauce glued it all together: it was heaven.

Which is why, when Jeffery and Cole came over for casserole (see the post below), I knew what I was going to serve for dessert.

This was a very crafty move. When people go over to a food writer’s house, they sometimes worry they’re going to have to eat something frou-frou at some point during the meal. And since I’d made casserole for dinner, I bet Jeffery and Cole were worried they’d have to eat dehydrated cactus and lychee foam for dessert. But I had something waiting in the refrigerator.

Before they came, I whipped up a brownie batter from Martha Stewart (not this recipe, the one from her Baking Book, but that one will do–it looks fudgier), placed it in the pan, put saran wrap on top and placed it in the refrigerator.

I made David Lebovitz’s Hot Fudge Sauce (online here at Smitten Kitchen) and once it was cooked, turned off the heat, put the lid on and left it on the stove.

After removing the casserole from the oven, I popped the brownies in. They took about an hour which was perfect, because we were eating slowly and enjoying ourselves. When they came out, everyone was still too full for dessert, so that gave us time to let them cool a little.

Finally, I couldn’t take waiting anymore, and I cut in. I placed hot brownies at the bottom of four bowls, scooped on lots of vanilla ice cream (I bought Häagen-Dazs) and drizzled on the thick hot fudge sauce, which I’d heated back up. Tell me you wouldn’t want this at the end of a dinner party: 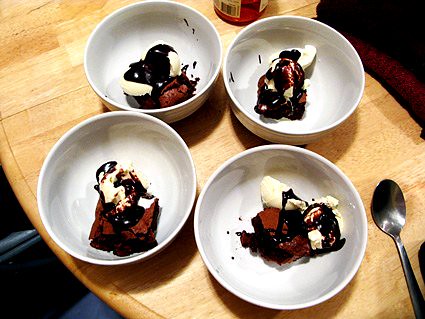 Protest all you want, brownie sundaes are calling you. Make them now, while it’s hot, and even the most vocal opponent will cave–they’re irresistible.