How To Do A Cooking Demonstration 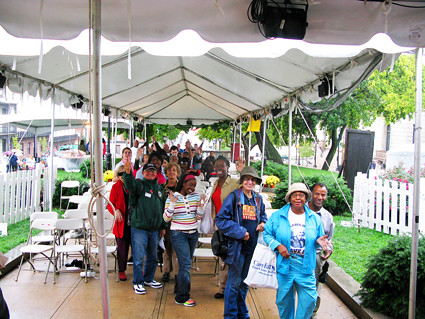 There a came a moment on Saturday at The Baltimore Book Festival where I looked out at the crowd and down at the food in front of me and realized: “Holy (expletive): I have to cook something for all these people!”

It wasn’t supposed to be that way. When I was first invited to The Baltimore Book Festival, I was under the impression that all they wanted me to do was read from my book (which, incidentally, comes out in paperback tomorrow!) I’ve read from my book several times, to various crowds, and the lessons I learned from those various experiences–read slower than you think necessary, lift your head now and again–had little application when I learned that in addition to reading from my book, the Baltimore people also wanted me to cook.

They called a few weeks before the festival to ask which ingredients I needed.

“Ingredients?” I stammered. “Oh, you must think I’m cooking; no, I’m just reading from my book.”

The woman on the other end was just as baffled as I was.

“Um, Adam, we have you slotted for an hour–you can’t just read from your book for an hour.”

When I realized I’d be on a stage with cooking equipment, and that a few hours before me Martin Yan would be on the same stage and that I’d be followed by the Hearty Boys, I realized I might be in over my head.

“Are you good at making omelets?” asked the woman.

“Not really,” I said, “but that could be part of what makes it entertaining–watching me struggle to make an omelet.”

The woman let out a tiny laugh and said “ok.” I told Craig what was going on and he was dubious: “Do you really want to make something you’re not good at making in front of 70 people?”

A week before the festival, that same woman called and talked me down from the ledge. “Listen,” she said, “I just looked through your book: why don’t you make something you know how to make really well? Like the tomato sauce from the first chapter?”

As much as I still thought it’d be funny to sending flying chunks of egg over the audience’s heads, I realized this woman had a point.

I told her the ingredients I needed–canned tomatoes, garlic, basil, olive oil, salt, pepper, cheese–and that I’d be doing a faster recipe I know, one from Lydia Bastianich’s book that’s my go-to sauce when I’m in a hurry (the one in my book is the one I use when I have more time.)

On the Wednesday before the festival, I practiced my sauce. I thought the sauce over and remembered that the last time I made it, the sauce didn’t really adhere to the pasta; so, in my experiment, I added tomato paste at the beginning. And the finished dish came out perfect: 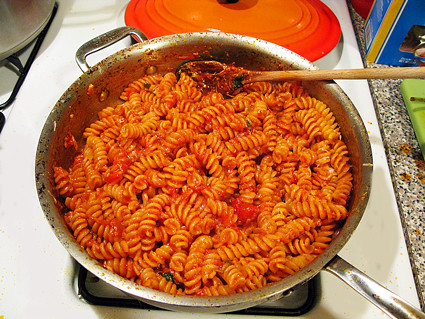 (Note: because readers complain when I have a messy stove, I used Photoshop to make it look much cleaner than it really was. Can you tell???)

I e-mailed the Baltimore people and asked them to add tomato paste to my list.

On Friday night, Craig and I journeyed to Baltimore. We arrived at 11:30 and caught a re-run of the debate, before passing out from our travels.

On Saturday–the day of my presentation–it was pouring. I arrived at the festival hours early, I wanted to scope it out. I watched Martin Yan win the crowd over with his charming repetitions and audience interaction; I heard Brooke Parkhurst explain to the audience who The Minimalist was; I wandered around, poked my head in the McSweeney’s tent, grabbed coffee from Donna’s, flipped through vintage copies of Moby Dick and Pride & Prejudice and finally, 3:15 rolled around. I was going on at 4.

So here’s how you do a successful cooking demonstration.

(1) Introduce yourself to everyone backstage. I met all the people who’d be helping me, made friends with my co-emcee Kevin (a chef in Baltimore) and somehow, by chitting and chatting, I felt much less nervous and much more excited–it’s the difference between performing for strangers and performing for friends;

(3) When the time comes to go on, come out with lots of energy. Most of my energy wasn’t the good kind of energy, it was nervous energy, but somehow I parlayed that into a quick bond with the audience: I told them who I was, held up my book, told them about the blog and the book and hosting a show for the Food Network online. Then I said, “And this is my first cooking demonstration ever, I hope I don’t burn down this tent!” They might’ve run away screaming; luckily, I think they found it charming.

(4) Actually, telling the audience that this was my first cooking demonstration ever was the smartest thing I could do. They were immediately on my side. I called up a volunteer to help me open cans; I started talking about this recipe and why I like to make tomato sauce. I read the first part of the first chapter of my book and they were really laughing along. Somehow a bond had been established and the more I went on, the more I felt at ease in front of everyone.

(5) When it came time to cook, I had to do the thing that most aspiring Food Network stars have trouble doing: talking and cooking at the same time. Somehow, I made that work; I smashed garlic and explained the easiest way to get the garlic out of the skin (cut the end off and smash it with your knife.) I turned the stove on and got the pan heated, added the olive oil and the garlic and then the red pepper flakes and tomato paste and finally the tomatoes. I asked if there were any questions; someone asked if I should also add sugar. I said, “That’s a good idea, but I think the tomato paste will help sweeten it.” I made sure the pot of water was boiling for when I added the pasta later.

(6) Once the sauce was simmering, I read a little bit more from my book, from the introduction. I realized that the real skill here, the thing that makes cooking stars cooking stars, is their ability to fill the air with noise in the downtime between cooking steps. It sounds silly–is it really that hard to keep talking when you’re not doing anything worth talking about?–but the answer to that question explains why Rachael Ray has a multi-million dollar empire. There’s an actual skill there, to make the audience feel like they’re spending time with a friend; if you were standing with a friend in the kitchen and they finished throwing everything in the pot, would you just stand there in stony silence? No, you’d keep chatting and that’s the skill I discovered I needed to survive my first cooking demonstration.

(7) When it came time to add the pasta to the boiling water, I lifted the lid and it didn’t look like there was enough water in there to boil two pounds of pasta. Panic! The helpers came on and started boiling a separate pot of water, but I knew that if I waited for that pot to come to a boil the sauce’d be done and I’d be up there with my pasta killing even more time. So I added as much pasta as I could to the water that was there and it ends up that there was enough water for all of it. I tried to time it perfectly so the pasta would be done when the sauce was ready.

(8) Actually, timing is the most important thing. Whatever you’re cooking, whatever you’re planning to do, make sure that everything times out; that you start the pasta at a point where the sauce is already halfway done. You don’t want the pasta to be done before the sauce is ready. This is a good tip not just for cooking demonstrations, but for home cooking.

(9) Keep asking the audience if they have questions; when they have questions, answer the ones you know and the ones you don’t know, throw back to the audience. For example, someone asked what kind of pasta to cook with different kinds of sauce. I know Italians have strict rules about pairing pastas with sauces but I forgot what those rules were, so I threw it back to the audience and someone near the front answered the question very smartly. I was so nervous, I completely forgot the answer.

(10) Cooking a dish on stage gives you a natural structure for shaping your presentation. Obviously, once the dish is done, you’re done! Towards the end, get the crowd excited. Make them cheer for their food; have someone come up and taste the sauce. I had my helper who helped open the cans come up and taste the sauce and she said it needed more salt. “Ok,” I agreed, “let’s add more salt.”

And that’s it. Before you know it, your cooking presentation is over and people are lining up to try your food (that’s the picture you see at the top of this post.) And here are the helpers helping serve my food: 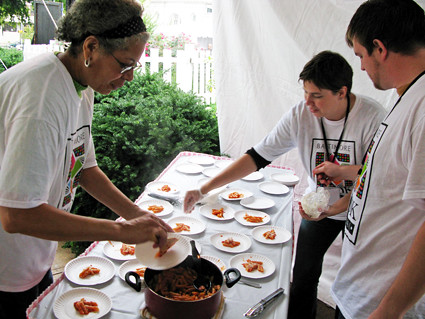 There was this extraordinary feeling, this giant rush, when I realized that the food I just cooked would feed all those people in line. I watched the first person carefully, to see if she took more than one bite. She did. So did the others.

I took my mic off and breathed a sigh of relief. “How’d I do?” I asked the first people I recognized. “You did great!” they said. One of the women selling books said I was the most charming of all the presenters that day. Home run!

Those of you are anxious to hear about our Baltimore crab experience, tune in tomorrow. And those of you who want the recipe for the tomato sauce, here you go…

This is a fast and loose version; for the more exact version, check out Lydia’s books.

1. Get a big pot of water boiling;

2. Take a few cloves of garlic, depending on how garlicky you like it, and cut them into slivers or bits (slivers for less garlicky, bits for more garlicky); add them to a pan coated thinly with olive oil (about 1/4 cup) and turn up the heat to medium/high.

4. Add a big can of whole-peeled tomatoes (preferably San Marzano) that you squash, first, in a separate bowl.

5. Turn up the heat to high, bring to a boil, season with salt, take a stalk of basil and submerge it in the sauce. Put the lid on and lower the heat. Let it bubble and burst with the lid on for 10 minutes.

6. Five minutes in, add your pasta (1 lb for 1 big can of tomatoes)–I like fussili or penne–to the boiling water and a handful of salt. (Actually, add the salt before the pasta; it raises the water temperature.)

7. When ten minutes have expired, take the lid off the tomato sauce. Let it continue to bubble and reduce; it should thicken up before the pasta’s done.

9. Taste your sauce, does it need more salt? More pepper? Adjust it now, we’re about to add the pasta.

10. Taste the pasta as it boils; you want to catch it right before it’s fully cooked, when it’s just a little too al dente but mostly cooked. At that point, strain the pasta (or lift it out with a spider) and add it to the bubbling tomato sauce. Let it finish cooking in the sauce.

11. Stir, stir, stir; ideally, the pasta will finish cooking as the sauce evaporates and when you’re done, you can drag your spoon across the bottom of the bowl and there won’t be any sauce left–the pasta will be fully coated.

12. Turn off the heat, add fresh basil to the pasta, some more chili flakes, a little olive oil and lots of cheese (I like Pecorino, but Parmesan works too.) Stir, serve, and enjoy.