Can you imagine going to a restaurant 10 or 15 years ago, sitting down at the table, glancing at the wine list and enjoying the surroundings, only to have the server set down a plate–no, not a plate, a wooden box–with spikes jutting out and on the top of each spike a tiny tomato? That’s precisely what happened last night to Craig and I at Blue Hill Stone Barns, now officially our favorite restaurant. “I’ve never been to a better restaurant,” Craig declared halfway through our meal. “This is as good as it gets.”

Tomatoes on spikes as good as it gets? Were we out of our minds? What happened to cooking–good old fashioned cooking–where ingredients matter far less than technique, execution, saucing, plating, style? Is this seasonal food movement just a fad, the new “pink,” a craze with as much staying power as slap bracelets or Tickle Me Elmo? Without question, seasonal has become trendy: we saw Katie Couric at BLT Market when I went there with my family last week; and Park Avenue Summer, where we had brunch on Sunday, seems more concerned with the farm as a design motif than a philosophical conceit. Check out this bowl of fruit that came with my “seasonal” brunch:

Sure, peaches are still in season, and figs are too, but were these grown locally? The strawberries look supermarket plump and the taste made me think that some of these guys had spent the night before in the fridge; compare that to the tomatoes in the top picture and you can see how a concept travels from pure expression (fresh farm tomatoes, picked that morning) to empty posturing (a sad, flavorless fruit bowl). Is this what’s in store for the seasonal food movement? Disingenuous branding that taps into a collective need to return to the earth?

That need–a very potent need to return to nature–is very much a function of the times in which we’re living. There’s war, there’s terror, there’s the isolating power of the internet: most of us, these days, feel completely disconnected from everything, and certainly disconnected when it comes to where our food comes from. Hence the popularity of recent books like Michael Pollan’s “The Omnivore’s Dilemma” and Barbara Kingsolver’s “Animal, Vegetable, Miracle”; hence the whole-world expansion of Whole Foods and the arrival of apples in McDonald’s Happy Meal. And as for restaurants, it’s no wonder that Chef Laurent Tourondel–who’s conquered Fish, Steak, and Burgers is now setting his sights on the market:

By what standards does one judge a meal at BLT Market? By the standards of the New York restaurant scene or by the standards of seasonal eating as established by the cheery godmother of the movement, Alice Waters? By the former standards, this restaurant will succeed. Each dish gives you bang for your buck in terms of quantity (big portions), flavor, and inventiveness, like this tomato watermelon salad which produces a magical elixer of tomato and watermelon juice that you’ll want to sop up at the bottom of your plate:

Not sure how this pig-in-a-blanket amuse fit the theme:

Or, for that matter, how this langoustine risotto sings of the market: 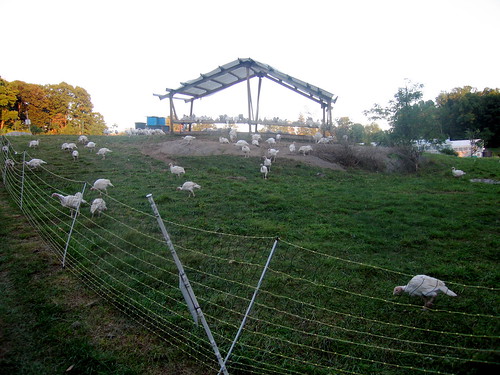 It’s almost unfair to compare those other places to Blue Hill Stone Barns. I mean, when in your life have you gone to visit your food right before you eat it? See those wild turkeys above? Well here’s one of them on my plate:

No gimmicks, no trickery: this is honest food. More than any other chef, Dan Barber puts his money where his mouth is: he’s an academic, a scholar, a thinker who understands the importance of eating seasonally, of eating locally, but more importantly he understands the power of it, the wonder of it, the magic of it. He’s not doing this because it’s trendy, because the tides are turning in this direction. He’s doing this because he believes in it, because he knows that this kind of eating is the best kind of eating.

There’s so much joy in Chef Barber’s food. I mean who thinks of this?

That’s toasted walnut bread with homemade butter, homemade ricotta, an eggplant spread and then two types of vegetable salt. Where else would you find something like that?

Or the garnish that came with this:

That’s a kind of risotto made with South Carolina rice and tomato. What was the garnish? It was the yolk of an egg–a very young chicken egg that hadn’t developed a white yet–that was cured with salt and hung out to dry for two weeks. “It’s a bit like Parmesan,” said our waitress, who grated it over our plates. “Only different.”

And the strawberries used to make this “strawberry cannelloni” dessert put the Park Avenue Summer strawberries to shame:

A dish like this requires every bit as much effort as the most classic French preparation–how does one make cannelloni out of strawberries anyway?–and yet it celebrates the fruit itself, a fruit that was most likely picked that day just a couple of yards away.

When a cause becomes trendy, awareness will increase but adherence to the cause’s strictures will dissipate. Look at Kabbalah. In Elie Wiesel’s “Night,” he says this complex and demanding branch of Judaism was only reserved for the most devout rabbis. Now it’s practiced by Madonna. Do you think Madonna adheres to its tenets the way an Orthodox rabbi might? It’s possible that she does, but I kind of doubt it. And her watered-down version of Kabbalah is like the watered-down version of seasonal food you find at Park Avenue Summer and B.L.T. Market.

If you decided to study Kabbalah tomorrow, would you turn to Madonna or a wizened old rabbi? If it’s the latter–and I hope it is–then the parallel figure in the food world is Dan Barber. Make a spiritual journey to Stone Barns (a 30 minute train ride from Grand Central) and you’ll understand what this movement is all about. My feelings about Dan Barber and his restaurant are best expressed by this classic lyric: “Life is a mystery / everyone must stand alone / I hear you call my name / and it feels like home.”

13 thoughts on “Seasonal is the New Pink (An Essay with Visits to BLT Market, Park Avenue Summer and Blue Hill Stone Barns)”