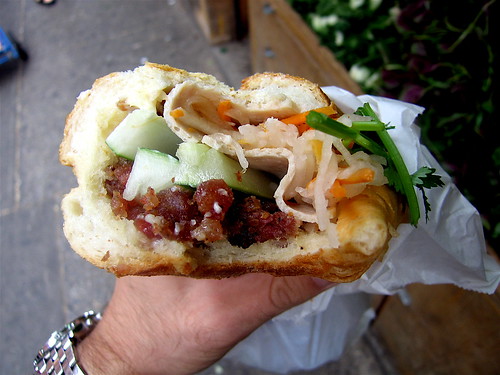 In the current food issue of The New Yorker, Calvin Trillin wonders–in another one of his hilarious food essays–if “through some rare genetic oddity, my sense of taste is at full strength only when I’m standing up.” He wonders this because of his deep love for street food. As a participant of the Calvin Trillin walking tour last year, I was lucky enough to eat street food standing up with the man himself. And the best bite of the tour was, by far, the bite you see above.

That’s a pork banh mi sandwich. It’s probably one of the most remarkable deals in the city in terms of what you get for what you pay. It costs $3.25 and it is ENORMOUS and packed full of vegetables and explosively flavorful pork bits. It’s located at the back of a jewelry store at 138 Mott Street between Grand and Hester. Last week I went back for the first time since the tour and the place was relatively crowded for a jewelry store sandwich shop. But what a wonderful secret: the sandwiches are as artful and enjoyable as those you’d get at a high end sandwich shop (‘wichcraft, for example) and about 1/3rd the price.

Plus you get to eat them standing up. Now here, on Mott Street, where Chinatown and Little Italy meet there’s lots to observe. You can observe, for example, a giant garbage pail filled with live frogs outside a Chinese grocery store. Or you can observe the people cuing up inside Di Palo’s, the legendary cheese shop just across the street on the corner. By the time you finish your sandwich, you’ll be standing in front of Ferrara and wondering whether you should have a canoli. I resisted the temptation, not because I’m trying to lose weight or anything (God forbid) but because Ferrara’s gone downhill since I knew and loved it as a kid.

A few days later, here in Park Slope, I wanted a bagel–a real bagel, though, not the weirdly puffy ones I get at Bergen Bagels or A.R.E.A. that opened up just down the block. These bagels are crowd-pleasing bagels–crisp on the outside, light on the inside–but they always taste strangely fake to me. I say this as a person who used to eat Dunkin’ Donuts bagels in Atlanta on a regular basis.

After doing some research online, I learned about the Bagel Hole on 7th Ave. between 12th and 13th Street. Apparently Arthur Schwartz called it the best bagel in Brooklyn, and with a name like Arthur Schwartz why shouldn’t I trust him? So I made the trek–I stopped into the Park Slope Barnes and Noble first to see if my book was there and I may have moved some books from the cookbook shelf to a prominent display, hehe–and then rewarded myself with this bagel: 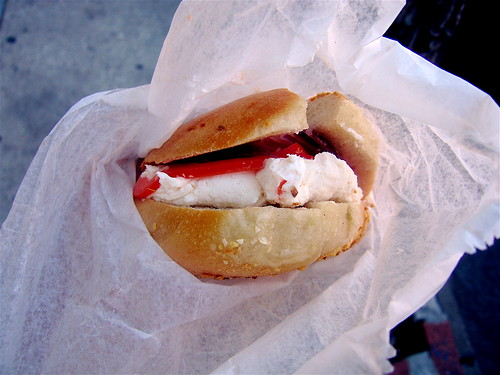 That’s a Bagel Hole onion bagel with lox spread (my favorite bagel topping), tomato and onion. This was the bagel I was craving: honest, chewy, real. The cream cheese also tasted more real: tangier than the kind you’re used to. And I ate it standing up across the street (there are no tables at The Bagel Hole) and I think Calvin Trillin’s right: food does taste better standing up. Maybe because you’re totally focused on the food itself. Your sole purpose is to eat while you stand there, halted in your day’s progress, immersed for a moment in the bliss of a bagel or a banh mi.

Next time you’re hungry in New York City, don’t go somewhere with a table. Stand up for your right to eat on a city street: it’s what makes life here better than the suburbs.