Welcome to Music Week! Every post this week (except for the one below) will feature a song penned and performed by yours truly (and maybe a few special guests). To start out the week, I thought long and hard about what would inspire me musically. And then I remembered this: 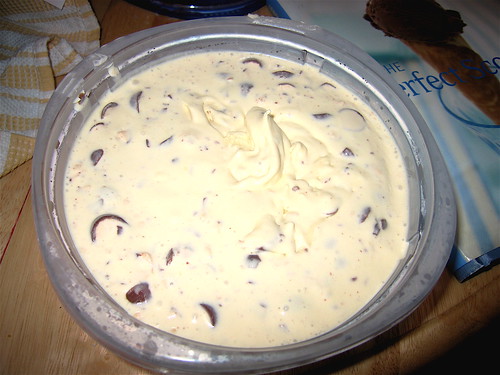 That is the tub of David Lebovitz’s malted milk ice cream that I made two weeks ago from his book The Perfect Scoop. It vanished in two days. I caught Diana eating it for breakfast, and Craig eating it in the middle of the afternoon. I told David I wanted to write a song about it and he confessed that it’s his favorite recipe in his cookbook. I agree (and I’ve only tried three!) What follows, then, is the song that it inspired and, after the jump, the lyrics and the recipe. Enjoy!

music and lyrics by Adam Roberts

Don’t give me a milkshake

Don’t give me a glass of lemonade

Don’t give me a soda, no no

Soda’s only for the fat and underpaid

Don’t give me a yogurt

All I need is a great big bowl

Don’t give me no foie gras

Don’t give me imported sturgeon caviar

Don’t give me a truffle no no

Don’t give me a tasting menu

all I want is a great big bowl

No Ben and Jerry

Could Make Me Merry

Could give me vapors

could chew the scenery

Warm the half-and-half, sugar, and salt in a medium saucepan. In a large bowl, whisk together the heavy cream, vanilla, and malt powder and set a mesh strainer on top.

In a separate medium bowl, whisk together the egg yolks. Slowly pour the warm mixture into the egg yolks, whisking constantly, then scrape the warmed egg yolks back into the saucepan.

Stir the mixture constantly over medium heat with a heatproof spatula, scraping the bottom as you stir, until the mixture thickens and coats the spatula. Pour the custard through the strainer and whisk it into the malted milk mixture. Stir until cool over an ice bath.

Chill the mixture thoroughly in the refrigerator, then freeze it in your ice cream maker according to the manufacturer’s instructions. As you remove the ice cream from the machine, fold in the chopped malted milk balls.