What Did Craig Get For His Birthday? (Answer: Blue Hill)

We were walking south on 5th Avenue and Craig was on the phone with his mom. It was 7:28 and he and his mom were guessing where I was leading him. “I think that might be it,” said Craig, responding to his mother’s guess. I just knew she had guessed Babbo so I said, “Whatever you think it is, you’re so far off you have no idea.” Then I pretended like my cell phone was buzzing and I answered it. “Hello?” I faked. “Oh really? Ok, that’s fine, not a problem. We can be there at 8.” Craig, off the phone with his mom now, looked at me quizzically. “What’s going on?”

“That was the restaurant,” I said. “The table’s not ready. They said we should come at 8.” We were outside the Washington Square Hotel. “We could go in here for a drink,” I suggested. The Washington Square Hotel is Craig’s favorite watering hole in New York. So he obliged and we navigated our way through the lobby, down the corridor, down the stairs and into the wide bar where Craig looked for a table. At the back he saw a large group that instantly yelled, “Surprise!” It was all of his friends, just like I’d arranged:

I think Craig was genuinely shocked because he brought his hands to his face and looked at me with a frantic, “I can’t believe you pulled this off” expression. Then he hopped over to his friends and spent the next two hours drinking and laughing and talking about how much he loved “Children of Men” which we saw a few hours earlier. It’s a brilliant movie and it’s brilliantly potent: I was still freaked out by it hours later.

After our two hours of drinking, I told Craig we had to get moving: part two of our evening was about to begin. Now Craig was totally convinced that we were headed to Babbo. The Washington Square Hotel is directly across the street from Babbo and as we bid farewell to his friends, I could tell he thought he’d figured it all out. I led him across the street and though it was drizzling I paused and said, “I bet you think we’re going to Babbo.”

I laughed and shook my head no. Then I led him along Washington Square West to Washington Place and made a right. “Do you have any idea where we’re headed?”

“It’s a restaurant that you know exists,” I said, “but I don’t think you know it exists right here.” And since, after a few paces, we were standing in front of it I told him to look to his right. He did and expressed immediate delight.

We’d gone to Blue Hill Stone Barns this summer and Craig absolutely loved it. I declared it my new favorite restaurant. So Bill Hill Manhattan was our inevitable destination. And once inside I could tell we were in the right spot.

“It’s so cozy in here,” said Craig. The host welcomed us and led us to a table in the front half of the room. We took in our surroundings and Craig said it was a perfect choice. I patted myself on the back.

So I decided not to thoroughly document the meal because it would detract from our enjoyment. I focused on the most photogenic dishes, like this high-concept presentation Craig is showing off:

Those are olive oil macaroons and on the sticks, chicory. And now for my Chevy Chase moment: Craig removed the entire stick from the box to eat his chicory and so I decided to do the same. Only when I yanked my stick out the chicory shot into the air and landed under the table of the people sitting next to us. The waiter called it my Julia Roberts in Pretty Woman moment. (He then ran to the kitchen and immediately replaced my lost chicory.) 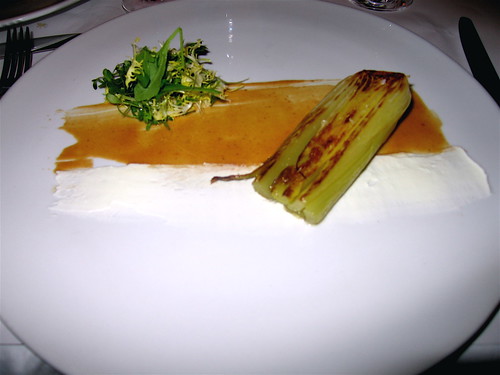 It looks deceptively simple, but it was wonderfully flavorful with the brushtrokes of yogurt and something that tasted like caramel on the plate.

The scallop was gently cooked and the sauce perked it up with bright acidic flavors. (God, I never want to be a food critic.)

And now for the most beautiful plate. Please look at this plate and tell me it doesn’t look like a work of art that could hang in a musem:

That’s Berkshire pork with braised endive and pears but it looks like something by Picasso. And believe me when I tell you it tasted as good as it looks.

Finally, they brought out a chestnut crepe with chestnut filling and chocolate sauce. A candle was balanced perfectly on the plate:

Craig blew out the candle and I immediately became a woman. Just kidding! Craig told me it was one of his best birthdays ever and I believed him. And that, my friends, is what Craig got for his birthday.