One of the perks of being a person who cooks is that, as a person who cooks, you can get people to do things for you in exchange for cooking. So Stella, my dear friend, agreed to cat-sit for me while I was in Seattle if I agreed to cook her a Southern dinner when I got back. Deal! Here she is waiting for her reward and laughing at something funny:

In front of her (and Diana and Craig) you’ll see a salad, which was the one consolation I made to health before the dinner began. Every thing else would be a nose-dive into Southern hedonism.

Now for this Southern meal I had many cookbooks available to me–The Southern Table, The Gift of Southern Cooking–but I decided to go with my newest addition, the one my friends and I refer to as the gay Southern cookbook.

It’s the Lee Bros. Southern Cookbook and I poked fun about it here before because those Lee brothers are so well dressed and wearing such similar outfits and standing so close together. But the Lee Brothers are also terrific writers and as I soon learned, they write terrific recipes. This cookbook is super user friendly. Everything I made from it came out perfect and was really easy to do.

I started with their Cheese Straws. To make these cheese straws all you need is a food processor and a rolling pin. Into the food processor put 4 oz. grated extra-sharp cheddar, 4 Tbs softened unsalted butter, 3/4 cup all purpose flour, 1/2 tsp kosher salt, 1/2 tsp crushed red pepper flakes and pulse until it resembles coarse meal. Then add 1 Tbs half and half and process until it forms a ball. That’s all the “cooking” you need to do!

Now you roll it out into a 8 X 10 inch rectangle on a floured surface. 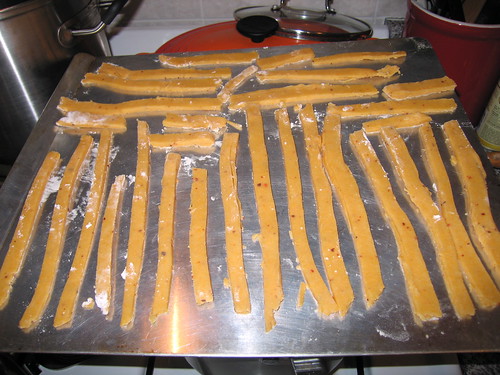 Now on to the casserole. Stella’s a vegetarian so i wanted something decadent and special that didn’t have meat. Bring on the Winter Squash Casserole.

This casserole has: butternut squash (though you can use kabocha or acorn too), butter, onions, buttermilk, eggs, thyme, bread crumbs, toasted pumpkin seeds and grated cheddar cheese.

Into the oven it goes for 45 minutes, then you remove and top with more cheddar and pumpkin seeds. It goes in 15 minutes longer and out it comes:

(Diana took the leftovers to work the next day and enjoyed them even more.)

Finally, there was dessert. Recently I praised the Coconut Cream Pie at Dahlia Lounge in Seattle. That CCP was super subtle and super fresh. The one I made from this cookbook was the opposite: made with processed coconut flakes, although the cookbook authors don’t advocate that. (They call for “2 cups shredded coconut, preferably unsweetened.”)

But sometimes I like my coconut cream pie with processed sweetened coconut and this one did not disappoint. And it was one of the easiest desserts I’ve ever made. You bang up a bunch of gram crackers, mix with butter, press into the bottom of a pie pan and bake. Then you make the filling: whisk cream, egg yolks, vanilla, corn starch and coconut over low heat for 8 minutes until it coats the back of the spoon. That’s it. Pour into the pie shell:

Bake for 10 minutes at 350 and remove. Then cool and place in the fridge for 4 hours.

The perfect ending to a perfect Southern dinner. Stella couldn’t have been happier. She was so happy she wanted to cat-sit for me forever so she could get more meals like this. “Maybe you should go back to Seattle next week?” she suggested. “Or what about Vancouver? I hear Vancouver’s nice.”

Sorry Stella. The space between the meals is what makes them special.