“If I ever go looking for my heart’s desire again, I won’t look any further than my own back yard.” – Dorothy, Wizard of Oz

Good point, Dorothy! And since I live in Park Slope it’s time to stop trekking into Manhattan for my stomach’s desire and time to start searching right here where I live. Especially because it’s snowing. And icy. And cold.

So here’s what I found. I found this awesome pizza at Franny’s:

Franny’s was in my brain like a forgettable cousin, flitting around the Bar Mitzvah of my consciousness, never really getting noticed as I was lifted in my chair to Hava Nagila. I knew Diana went on a date at Franny’s (prognosis: good pizza, bad date). And then I had dinner with Julie, Lauren’s girlfriend, here for work from D.C. and she told me she’d been to Franny’s with her co-workers and she couldn’t believe I’d never been there. Especially because I live a few blocks away. And so I went with Craig to Franny’s.

It has a charming interior, friendly staff and an open kitchen. They sell wine by the carafe so it’s very reasonable. We ordered some red (I forget which kind, sorry!) and then I ordered a pizza with anchovies (the one you see above) and Craig ordered a pizza with pepperoni. Here’s Craig with his:

We both loved our pizzas. They reminded me of the awe-inspiring pizza at Una Pizza Napoletana except a tiny drop cheaper and much more conveniently located. The crust had perfect texture: crusty on the outside, chewy on the inside. And the toppings were perfectly proportioned. It’s such a memorable pizza that Adam Kuban, ruler of Slice (and my colleague at Serious Eats), identified the pizza on my Flickr page without any indication from me. How did he do it? “Size, cheese distribution, char, went a long way in giving it away, but the plating and tabletop were the final pieces of the puzzle,” he explains in his Flickr comment.

Now this is a real find. It’s what a Chowhounder might call a..ummm…what do Chowhounders call their discoveries? Well it’s a real discovery. It was recommended to me by the all-knowing James Felder of Snapshot Artifact. He wanted to go there one night but I refused because I had sushi for lunch. He never forgave me but a few weeks later he told me ate there himself and that he loved it and that I had to go.

It’s some of the best sushi I’ve had. Wonderfully fresh, artfully arrayed and generous for what you pay. I liked it so much that I’ve been back twice for lunch and went there last night for dinner with Craig. We shared the “Sushi For Two” which was a bit pricier but a staggering amount of food. The service is excellent and friendly and it’s pretty close to BAM, where we went to see “Pan’s Labyrinth.” (Holy s-word, what a depressing movie! But so good! But so depressing!)

The final find involves a lovely story. The story involves the New Yorker. It’s not really a story, it’s more a diary-like reflection. You see when I lived in Atlanta and I was miserable in law school I used to sit in a Dunkin’ Donuts with my New Yorker every week and read the “Tables For Two” column dreaming of the day I could go to these places. I once thought that if I lived in New York I’d make it a point to eat at the “Tables For Two” recommendation every week. (I remember once it recommended the cafeteria at the United Nations: I still want to go there.)

Here’s The New Yorker review for you to read. It’s not entirely a rave, but it’s pretty positive. It tells you what NoNo stands for: North of New Orleans. The cuisine, then, is the food of the Big Easy.

This is what the interior looks like when Diana studies her menu:

I decided not to use a flash this time out because of what Frank Bruni wrote on his blog about flashes in restaurants. That doesn’t mean I won’t take flash pictures in the future, it just means I’m more sensitive to the environment. Here I thought it would disturb people.

So look at this flashless corn bread:

This may have been my favorite part of the meal—which isn’t to say the rest of the meal wasn’t great, it’s just to say I really loved this corn bread. It had a very strong taste of vanilla and it was hot out of the oven.

To start, Diana and I shared “Roasted Alligator Sausage”:

This may have been my first alligator (surprising, since I’m from Florida) and we both really enjoyed it. Did it taste real different from “normal” sausage? Not really. It was fatty and flavorful and the creole mustard sauce worked well with it.

For my entree, I had the signature dish–Blackened Catfish with Sauteed Andouille, Crawfish and Succotash in a Light Cream Sauce: 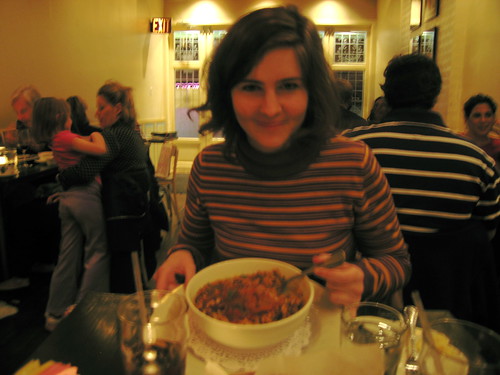 The food was really well prepared and quite authentic, as far as I could tell. I enjoyed the surrounding bits on my plate as much as I enjoyed the catfish. Diana liked her Jambalaya and didn’t think it was too spicy as the menu warned. We both chewed pleasantly, but not entirely thrilled.

The service, I must say, was pretty bad. The waitress was totally sweet but entirely inept. Diana and I chose to ignore all the missteps: the 10 minute wait for menus, the 20 minute wait for drinks, the 30 minute wait for food. The table next to us, though, was fuming they were so irritated at the service. I felt bad for our waitress as she dealt with these angry people who didn’t like to be kept waiting irrational amounts of time to have their water glasses refilled. I’m not surprised, though, to see the service denigrated on the Menupages page.

NoNo, which is the furthest from my apartment (all the way on 7th ave. and up quite a bit), is probably the place I’m least likely to go back to. But that doesn’t mean I don’t recommend it, it’s just not a new staple like Franny’s and Taro are going to be in my dining-out repertoire. Now I’ll crawl into bed and let out a sigh like Dorothy and reflect, “There’s no place like Park Slope, Auntie Em.”