Nibbles 10.0 (including an inside look at The Taste of New York)

I do Nibbles so often these days that I think I should start numbering them. But since I don’t know how many I’ve done, I will arbitrarily assign this a number. And that number is 10. This is Nibbles 10.0. Welcome. And now for Nibbles.

I have a problem and the problem concerns the tip jar at my new coffee shop. See at my old Manhattan coffee shop lattes and cappuccinos cost $3.50. So I’d pay $4.00 and get $0.50 change which I’d put immediately in the tip jar. The people who worked there smiled gratefully. “Thank you!” their faces would say and sometimes their mouths would say it too. I felt quite well liked at my old coffee shop.

At my new Brooklyn coffee shop lattes and cappuccinos cost $3 even. So I either pay $3 even or I give a $5 and get two singles in change. But singles in change is too much to tip for coffee. I can’t put a dollar in the jar every time I go or I’d lose all my money. And so when I pay for my coffee I reach in my pocket and feel for change and usually don’t find it. So I don’t leave a tip. And the people there give me a look that says, “Won’t you tip me?” And I give them a look that says, “I can’t! I’m sorry! I have no change!”

So the moral of the story is that though it’s nice that the new coffee shop charges less for coffee, I’d almost rather pay more so I can tip the people who work there. It occurs to me as I write this, though, and I’m sure this has occurred to you: if I continued to go to my old coffee shop I’d be paying $4 for coffee because of giving the $0.50 to the people who work there, so in the end tipping a dollar at my new one would cost me the same money. But it still seems extravagant. And that’s my tip jar quandary.

I was so excited to receive a free copy of this new cookbook by the Lee Brothers. 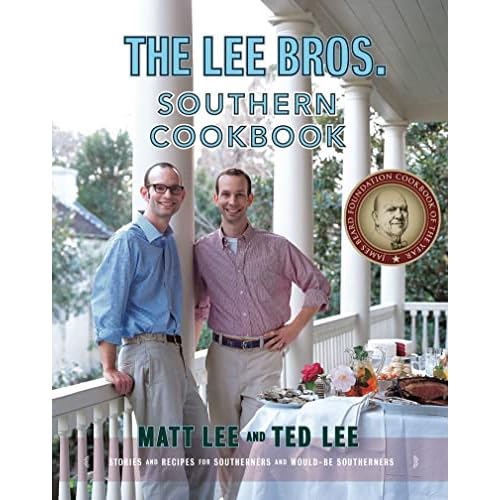 The book is excellent and the recipes look dynamite. But I have to share an observation from having this book around my apartment all day. People think it’s written by a gay couple. Craig, the other half of my gay couple, said: “Who are those gay guys?” when he saw the book lying on my kitchen table. “They’re not a gay couple, they’re brothers,” I told him. “Don’t you see it’s called The Lee Bros. Cookbok?”

And then Lisa came over and she also had the same reaction. “I was like, ‘what’s that gay cookbook?’ And then I was like ‘Oh, they’re brothers.'”

The three of us consulted and we agree that the problem lies in the matching shirts, the khaki pants, the smiles and the standing so close together. But Craig offers that their shirts are a little too big so they’re probably not gay. “A gay guy would wear a tighter shirt,” he concludes.

I wanted to do a separate post on this but Nibbles seems the right place. I have finally learned a way to appreciate that bastion of bad coffee known as Starbucks. As we’re all aware, Starbucks is taking over the world with stores opening on every corner of every city in every country east, west, north and south. Many see this as a bad thing but I see this as a good thing: mostly because Starbuckses have free public bathrooms. You may not think that a big deal, but when you’re in SoHo, as I was the other day, and you really have to pee and it’s raining, it’s much easier to pop into a Starbucks than to sneak past the host of Balthazar to pee. The same was true when I was in Paris last year. I really had to pee and I saw a Starbucks and sure enough there was a free public bathroom. So I think as long as we remember the equation Starbucks = Bathroom we can appreciate their constant proliferation. 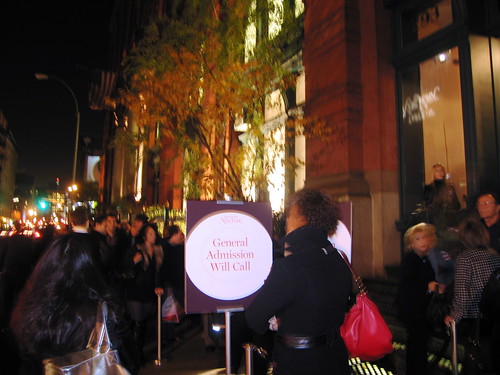 I got free tickets to New York Magazine’s taste of New York event at the Puck Building on Monday. Craig and I had a great time and enjoyed meeting the fine folks at NYC Nosh, the elusive Lockhart Steele of Eater and Curbed and the other half of the internet, and the fine people from Blue Hill Stone Barns who sought me out to say how much they enjoyed my comic book post.

Off in the distance there was Iron Chef Morimoto promoting Morimoto: 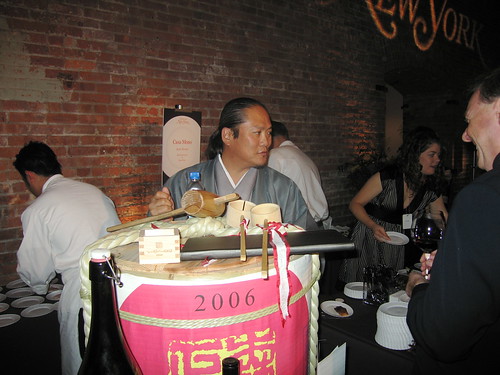 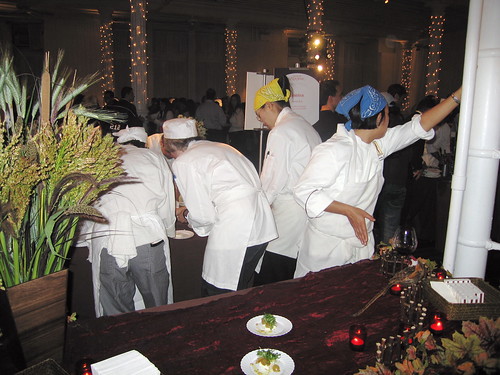 and Lydia Bastianich, who I introduced myself to and greeted most enthusiastically. (She was nice but not terribly receptive.) 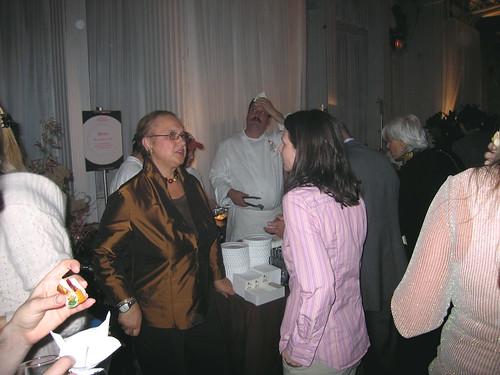 I spied Chef Todd English talking to that Iron Chef judge lady which I found suspect because he was once a contestant on Iron Chef and she may have been his judge. SCANDAL! 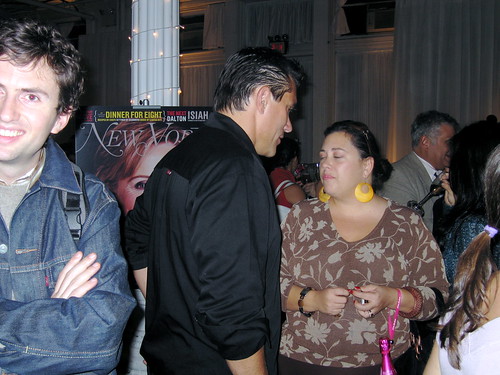 Our favorite bites from the event were, for Craig, the Per Se “Pastrami Sandwich” made with “Orange Marlin Pastrami with Per Se coleslaw and caraway seed melba.” 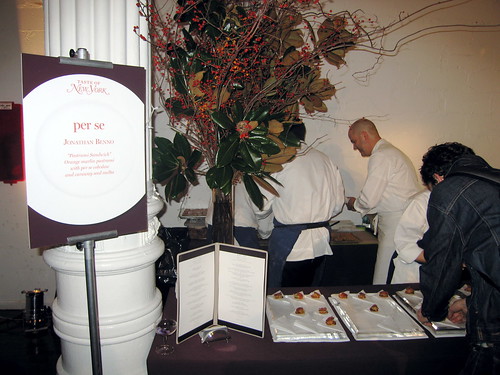 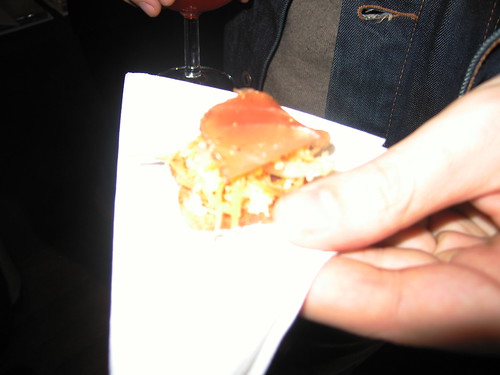 I loved the drinks from Pegu Club: 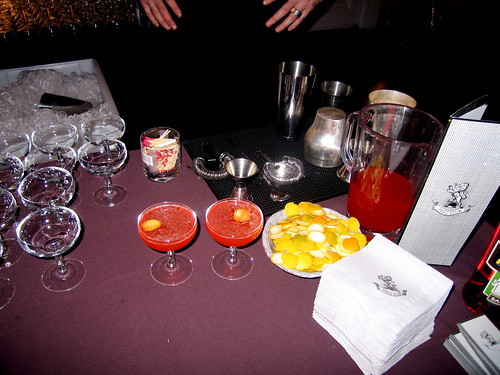 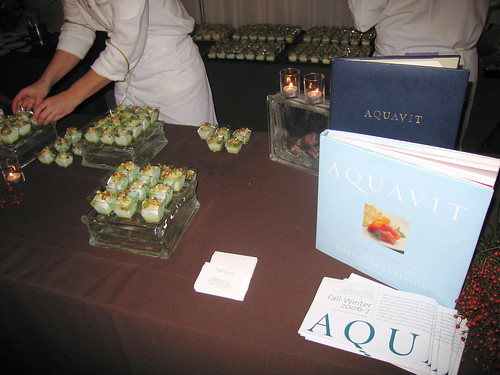 And, most of all, a pumpkin cheesecake from Gotham Bar & Grill: 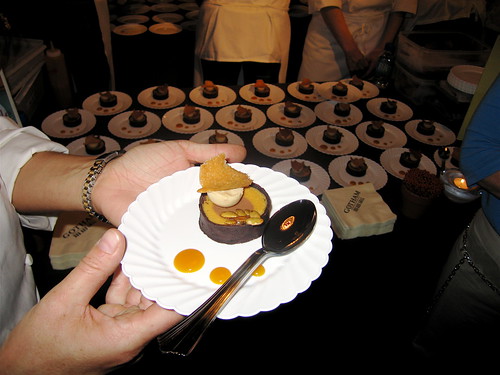 I met the pastry chef and she was incredibly sweet. So, in fact, was her dessert.

We left the event stuffed and went on to see “The Queen.” The next day we saw “The Departed.” And the Oscar goes to… Gotham Bar & Grill for its pumpkin cheesecake.