Only A Jerk Would Eat At Le Cirque

I am writing you, on behalf of the human race, to inform you that a famous restaurant, a restaurant whose name still carries great cache, is a danger to humanity. Never have I been more outraged by a restaurant than I was on Friday night when my parents, who came to town, took me–unwillingly, I might add–to that bastion of flash and dazzle, Le Cirque on the Upper East Side. 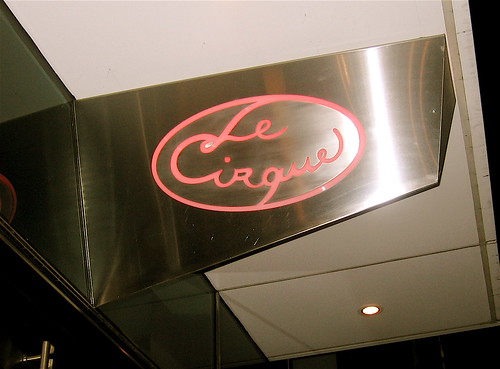 Le Cirque is housed in a futuristic glass building owned by our mayor, Mr. Bloomberg. The building is shaped like a hug which implies that when you enter this building you will be embraced. But don’t be mistaken: unless you are old and rich or rich and famous or old and famous you will not be embraced. You will be mocked, ridiculed and ignored. 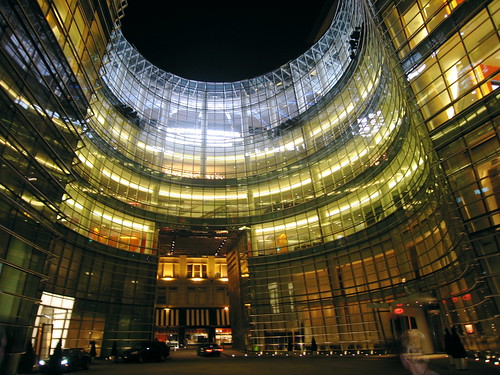 We all know the Ruth Reichl story, don’t we? How she went there two times when she wrote her famous review: once dressed as a wealthy woman and once as an old clueless biddy. Well the old biddy got treated badly, got a bad table, got smaller raspberries. Wealthy Ruth (who was recognized, I believe) got treated like a Queen. This is the allure of Le Cirque: you will be judged and how you are judged will affect how you are treated. If you are judged poorly you will dine poorly; if you are judged well you will dine well.

Ladies and gentlemen, this week and last week have been rough weeks for me in terms of being judged. I’ve been looking for an apartment and all the Realtors I meet want to evaluate me as quickly as possible: “What do you do? What’s your income? Do you have a guarantor?” Withstanding scrutiny is a tough enterprise and call me crazy but when I go out to recreate, the last thing I want to do is withstand more scrutiny. I want to relax, kick back and enjoy myself. This is a bad idea for anyone headed to Le Cirque.

I entered Le Cirque and found my parents at the bar. They were drinking their drinks and admiring how pretty the building was, how pretty the restaurant. It is pretty, in a gilded, corporate sort of way. Then I saw him, out of the corner of my eye, Sirio Maccioni, the legend–the man who weighs your worth the way a doctor might weigh you at fat camp–and I felt a chill in my bones.

“Sirio,” I said. “He’s the one who will determine our worth.”

My parents eyed him and then my mom, a sprightly creature, a woman with great energy and pluck approached him.

“Excuse me, Sirio,” she said in her charming New York accent, “I just want to say how excited we are to eat here. We’re very big fans.”

He lowered his eyes upon her and sniffed. He nodded his head and whispered something to a man in a sharp suit.

The man in the sharp suit said to us, “Right this way.”

We were led past the host stand and into the main dining room. How spectacular it was! The main dining room is a giant tent, aglow with orange and yellow, and filled with flowers and mirrors and framed pictures.

“Look at this room,” said my mom as we were led through.

And then they kept leading us through: past the suited men toasting over champagne; past the Upper East Side mink coats with poofy hair and glittery diamonds; past a slinky woman with her stout husband. We were ushered into the back, the very back, the room of shame and we were given the very worst table. There was no question: it was absolutely the worst table in the entire restaurant. There was no table worse. To give you an idea, here’s a picture: 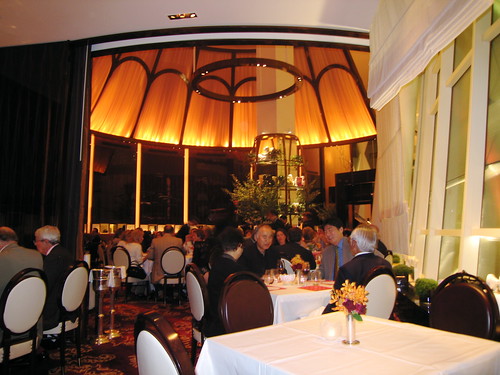 See that room with the bright tent? That’s the main room. And then there was our room. Our backs were to a wall and so were our spirits.

“No one puts Heidi in a corner,” I said to my mom who, for as long as I’ve known her, never accepts a bad first table. But mom was defeated.

“There’s nothing I can do,” she said. “This is the only table they have for us, I guess.”

A dark cloud descended on our meal and we felt ourselves unwelcomed and unloved. Our waiter was nice enough but we’d been judged poorly and he knew it. He must have been in the lower rung of waiters, the ones the Main Room waiters give wedgies to in the waiter locker room. We were all in mourning for our status in Le Cirque Land.

So what to make of a restaurant that makes you feel bad about yourself? What might redeem it? The food, I suppose. Perhaps humiliation is the price you pay for eating divine food. But the food at Le Cirque isn’t so divine and it’s damn expensive.

They gave us an amuse bouche of Lentil soup that tasted two steps away from a Campbell’s can with cream on top: 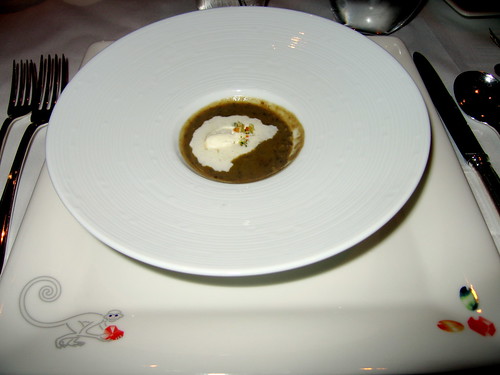 My appetizer of baccala ravioli was fine enough, 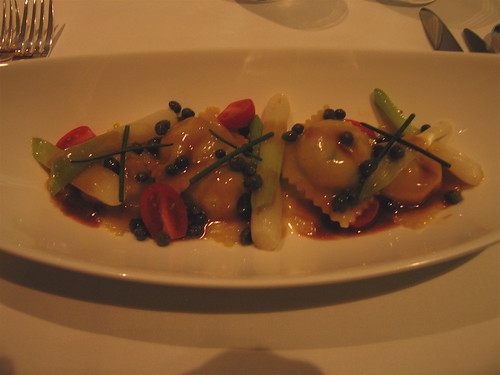 and you can’t say that it’s not a pretty presentation, but mom–who ordered an artichoke–declared her artichoke to be uncooked.

“This isn’t cooked,” she told our waiter.

Our waiter, a bit startled, looked down at the artichoke and brought it to the kitchen. When he came back with ravioli for my mom (she didn’t want another artichoke), he said to her, pointedly, “Ma’am, just so you know, you were correct about the artichoke. It wasn’t cooked.”

But we were stuck and then our entrees arrived. I ordered Langoustines because they were the most exotic (and almost the most expensive): 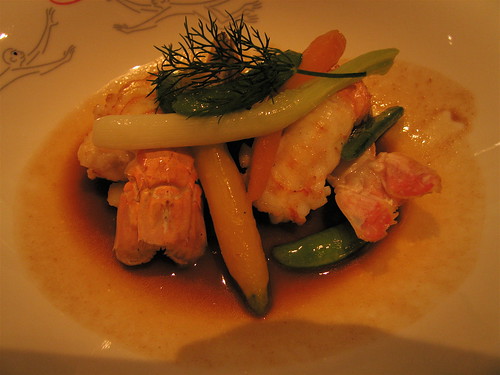 They tasted fine, that’s all I can say for them. You might accuse me of allowing my Le Cirque bitterness to cloud my judgment, but I feel strongly that if I’d eaten these Langoustines in a paper bag at the sea shore surrounded by friends and loved ones I’d still feel as indifferently about them. Mom and dad enjoyed their lamb chops, which they ordered enthusiastically, but when I took a bite I thought they were bland.

The only part of the meal that dazzled us, ever so slightly, were the desserts. Le Cirque is famous for its dessert artisans–Jacques Torres worked there, I believe–and the presentations were, to say the least, dramatic. Mom had the chocolate oven: 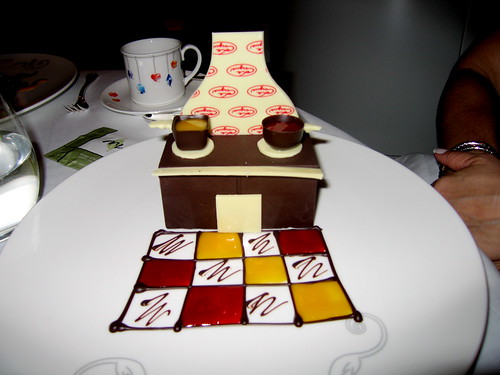 I had the floating islands: 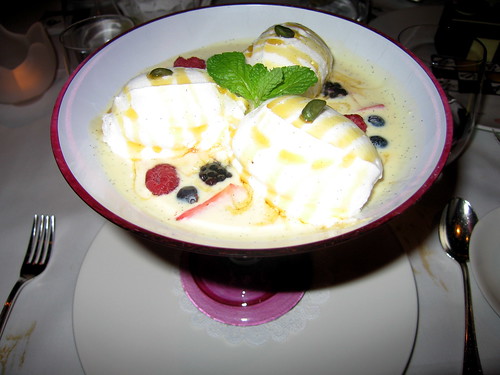 And dad had the most dazzling of all, a towering napoleon: 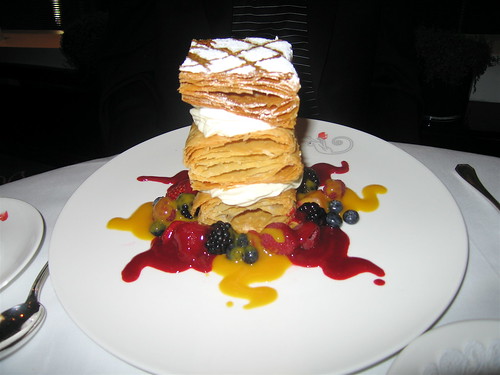 But dessert did not redeem this restaurant from the lowest rungs of my estimation. I hated this meal in a way I’ve never hated a meal before: I felt a violent emotional reaction to what this restaurant stood for. What kind of madness is this? Who would tolerate such poor treatment with such mediocre food at such high prices? I’ll tell you who: philistines.

Nabokov defines a philistine as “a full-grown person whose interests are of a material and commonplace nature, and whose mentality is formed of the stock ideas and conventional ideals of his or her group and time.” This perfectly describes the people who dine at Le Cirque: their ideas and ideals, though, are of a different time, the 80s, the decade of greed, when Le Cirque rose to power. Now Le Cirque, like the people dining there, is no longer relevant. You could feel its lack of relevancy in its quiet, its lack of buzz, the lack of people cuing up outside.

So what to make of our experience? I don’t feel that my review will somehow reach Le Cirque’s target audience. Most of you reading this would probably never even consider a meal there and I congratulate you for that. New York is filled with wondrous restaurants, restaurants with food and hospitality that rival all of the world’s major cities. Why anyone would waste their money at a place as unwelcoming and uninspired as Le Cirque is baffling. Lucky for you we wasted ours; don’t be a jerk and do the same.

Ever your humble servant,