Take a good long look at that picture. Study it, embrace it. What you are about to see, when you click ahead, are all the steps that went into making this dish–the crusty, golden exterior, the deep resonant sauce below: the braised leeks, the browned chicken, the herbed crumbs. This dish was an undertaking but an undertaking well worth it. Are you ready to proceed? Welcome to the world of extreme effort and extreme payoff. Welcome to the world of Lucques. [Cue dramatic music.]

“Sunday Suppers at Lucques” by Suzanne Goin is a book I quickly passed over when I saw it on the table at Barnes & Noble. Why? Well I’d never heard of Lucques, I’d never heard of Suzanna Goin and the recipes–at first glance–didn’t seem so special. I’m what they might call “a slow learner.”

After much time had passed, I began to read more about the book. What struck me most about the praise was the praise over the structure: this book was built, unlike other books, around 32 separate menus divided by season. So each menu consists of an appetizer, two entrees and a dessert and you suddenly have in your hands the perfect solution to any dinner party crisis. Suzanne Goin (who, after further research, it ends up is a culinary superstar) goes the full length with this book: not only does she create perfect menus, she tells you all about buying ingredients–how to judge them, when to buy them–and she does so without pretension and lots of enthusiasm. Most of the recipes come with personal anecdotes that make them all the more delightful to read.

So ok, ok, enough book-plugging (and, again, like the plugs below this one this is coming from genuine me–Suzanne Goin is not paying me off! But if she offers me a free dinner at Lucques, I’ll change the name of my blog to “I Love Suzanne Goin”) let’s get to the recipe.

There’s no way in the universe that I can type out all the steps, it’s too complicated. You’ll just have to look at the book at the bookstore or–gasp! shock!–buy it yourself. But here is a photo essay and some basic descriptions of what went into making it.

There was the marinating of chicken thighs in sliced onion, thyme, chopped dried pepper and vermouth;

There was the cleaning, trimming and slicing of leeks:

There was the browning of leeks in olive oil in the saute pan:

There was the placing of the browned leeks in a baking dish:

And then there was the addition–to that same pan–of more oil, shallots, thyme, salt and pepper:

Then wine was added as was stock, it was brought to a boil and poured over the leeks:

Meanwhile, bread crumbs were made:

The leeks came out of the oven:

More shallots were browned in butter with thyme, stock was added and vermouth:

The pan was cleared and the chicken was browned:

A mustard mixture was made with the sauteed shallots, Dijon mustard and fresh tarragon:

The chicken was coated in this mustard mixture, placed atop the leeks and then covered in bread crumbs which–incidentally–had been mixed together with brown butter, parsley and thyme. [Are you getting all this? Or is this like the “Tristam Shandy” of recipes?]

Finally, the whole thing goes into a 375 oven for 40 minutes, then the oven is turned up to 475 and the thighs are cooked another 10 minutes until the breadcrumbs are “golden brown.”

And here it is on the plate: 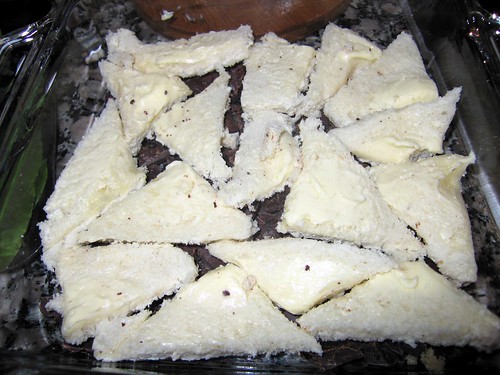 Pour it over the bread and bake in the oven at 350 for 1 hour. It comes out looking like this:

I know, I know it looks amazing but I must confess there were not universal raves.

“It tastes good,” said one surprise guest who came with her brother who lives in my building. “But it just tastes like what it is.” Meaning you can taste the bread, the butter, the eggs, etc. In fact the eggs were a little scrambled in the end product: they had texture, which wasn’t good.

But no matter. I’d conquered the mighty chicken dish and if my bread pudding was a failure, I could still go to my grave a hero. [And, just for the record, the next day–after spending 24 hours in the fridge–the remaining bread pudding tasted wonderful. So there!]

20 thoughts on “Allow Me To Astound You With My Kitchen Prowess and the Recipe I Made from my New Favorite Cookbook: Devil’s Chicken Thighs with Braised Leeks and Dijon Mustard from “Sunday Suppers at Lucques” [Plus: Bread Pudding!]”