On Feasting and Family 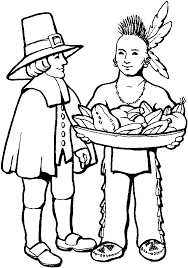 For those not in the know, this Thursday is Thanksgiving. It’s a day where we awkwardly sit around and wait to eat lots and lots of food. Then we eat lots and lots of food. Some people watch football. Then we go home. Maybe “Home for the Holidays” will be on TV. We go to sleep in our tiny childhood beds and ponder the vast emptiness of the universe.

But Thanksgiving is a feast—and when we think of a feast we think of celebration; of revelry. The god of Thanksgiving is Dionysus, not Dr. Phil. The original Thanksgiving was Pilgrims partying with Indians. There weren’t any parents, any aunts, uncles, brothers or sisters. No one to tell you that you’ve gained weight, that you’re a miserable failure, that you’ll never amount to anything.

Pilgrim and Indians had a lot to talk about. “What’s it like living in a tee-pee?” “What’s it like sailing across the Atlantic?” “Did you think Dances With Wolves offered a sensitive portrayal?”

Families have nothing to talk about. “Did you take the garbage out?” “YES, SHUT THE HELL UP, YOU DON’T OWN MY LIFE.” “Sorry grandma.”

But then again, Thanksgiving has its perks. There’s turkey. More importantly, there’s cranberry sauce. I love me some cranberry sauce. There’s also sweet potatoes–sometimes with marshmallows on them. Yes, I know that’s tacky, but I’ll eat it. Maybe there’s brown sugar and cinnamon in there too. Maybe for dessert there’s pumpkin pie. I really like pumpkin pie. I’ll confess, it’s not my favorite but I’ll eat it.

The Macy’s Thanksgiving Day Parade is something to watch dreamily, glad you’re not with the throngs in the street getting trampled on. Burly, manly men like me ignore the baton twirling and high school bands–we focus mainly on the show tunes. Katy Couric, Matt Lauer, and Al Roker add a certain debauched charm to the proceedings. We watch until the family decides to do something together like go to the mall. Then we have to miss the pre-recorded production numbers from “Wicked” and “Fiddler on the Roof.” We grow furious.

Dinner on Thanksgiving starts early. Like at 5. That’s really early. My family, this year, will go to a buffet which I will take pictures of for you. The last time my mom cooked a Thanksgiving turkey. Ha. That sentence was a trick. My mom’s never cooked a Thanksgiving turkey (at least I don’t think she has). I offered to, but my family is still suspicious of my ability to cook. Besides, going out is easier. Less dishes, less stains on the rug and, more importantly, a bevy of Pilgrims and Indians to interact with to make the feasting more feastable.

Perhaps not cooking a turkey at home and going out instead captures the spirit of the original Thanksgiving, where two cultures so unalike sat down at the equivalent of an Olive Garden and gorged on bottomless salad and all you can eat breadsticks. Of course, eventually, the Pilgrims would rape and kill all the Indians. And actually, they weren’t Indians–they were Native Americans. Indians live in India. Then there was that war in Iraq and the country went to shit.

Ok, on second thought, stay home–be with your family. They’re all you have.