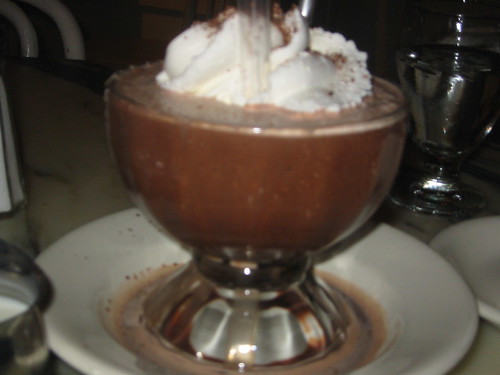 Funny you should ask. Serendipity recently came out with a cookbook where they apparently revealed the secret recipe for their frozen hot chocolate. I ran to the bookstore and charged my way to the cookbook section so I could learn the great secret. What is the great secret? “Choose your favorite hot chocolate mix, put in a blender with ice.” Ummm… that’s like Steven Speilberg telling his film students that the way to make a great film is to hit “record” on the camera.

No matter. I’m glad the secret’s not really out. Now you have a reason to go to Serendipity and experience the frozen hot chocolate yourself. It defies description.

Lauren and I sat at a round table like Archie and Betty or Jughead and Veronica, savoring the joys of a sodafountainy New York relic (that Andy Warhol and Jackie O frequented too):

What’s that other dessert on the table?

A Broadway sundae with black chocolate cake and whipped cream and vanilla ice cream and fudge:

It was way too much. But that’s the point isn’t it? When you take a cab 30 blocks uptown for ice cream, you don’t want a small cup and a dipstick. You want to binge. And binge we did. That, my friends, is Serendipity.

5 thoughts on “And then of course there’s Serendipity.”