Up Up and Away at The Floataway Cafe

The Floataway Cafe is (well, was) my favorite Atlanta restaurant. Maybe it still is. I’m undecided. Last night’s meal did not work well in its favor.

At least the Floataway is conveniently located: it is literally down the street from where I live. If Atlanta is an alphabet and I live in A, the Floataway is in B. Actually it’s closer than that: it’s A.3.

So last night Lauren and I ventured over after our reservation at Nam was cancelled due to a broken water mane. The Nam people were very aplogetic.

After the short 40 second drive, we pulled up to the Floataway building:

The complex is a warehouse complex that contains, among other things, a theater (Push Push), a quilting store and The Floataway Cafe. We made our way to the door:

Once inside the hostess kindly told us that it would only be a moment. Would we like to wait at the bar? The bar looked crowded. So we went back outside and told her to find us there.

She founds us there moments later and led us to our table.

The following picture is my favorite of the bunch, it really captures the Floataway aesthetic:

Milk bottle laterns hang over every table and giant sepia pictures of clouds adorn the walls. Unfortunately, most of the tables are banquettes and so when you begin taking pictures of all your food the people next to you start asking questions.

“Why are you taking pictures of your food?” they ask.

“We see,” they said and returned to their plates.

“Would you like bottled or filtered water?” she asked. This is the dining question of the new millenium. Every fine dining spot I’ve fine dined at now asks this question at the start of the meal. Bottled water is as much a fad as the low carb thing. And, of course, it’s a great way for restaurants to upsell their customers. In fact, I watched some show—now I forget what it was—where they sent a water sommelier to these people’s tables and he pretended to be a water expert and helped them match their courses to the proper water. Then they showed him going to the kitchen, filling up their glasses with a garden hose, returning to the table, serving it to them and then shooting their reactions. They ooohed and ahhhed. Rather funny.

She returned with a pitcher and began filling my glass. A stream of water spilled on my menu.

What good service, I thought.

Then she asked for our drink orders. I had been gazing at the eclectic cocktail list—fresh mint julips, lemon drop martinis—and I asked her which was best.

“They’re all great,” she said.

“But is there any one that you recommend?” I pressed.

Another complaint to register: SERVER AS AUTOMATON. This was the Charlie Trotter’s phenomenon: servers that are so accomodating they become completely inhuman. I wanted a little splash of personality, a little hint of individuality to guide our choices. None was forthcoming.

“I’ll have the orange blossom,” I said picking at random.

Actually, Lauren’s wine was really enjoyable. I love sweet drinks (hence the orange blossom) and Lauren’s Riseling (a German wine?) was incredibly sweet. I liked it.

My drink was so sweet as to almost be unpleasant:

Let’s see: it was orange vodka, triple sec, and simple syrup. I mean, I liked it, but I wouldn’t get it again.

Now then: the food.

The Floataway theory (as conceived by John Kessler) is that you go there for the appetizers, the pasta and the pizza. The entrees are to be left alone.

So Lauren and I each chose an appetizer.

I chose (rather controversially, since Lauren thought it was gross) white anchovies:

Lauren chose the fritto misto with prawns and fiddlehead ferns:

As you can see, the anchovies had a great presentation. And they tasted great: you really haven’t had an anchovy until you’ve had a fresh one, as opposed to the ones from the can. Salty, yet not overwhelmingly so, and the celery and other greens offered a nice green contrast.

Lauren was unhappy with hers: they fried her prawns with the shells on. She had to dissect each one before she could eat it. I suggested that she eat the shells and she was not happy with this suggestion. I attempted one of her prawns and as I cut into it, brown sludgy juice oozed out. Not particularly appetizing. The batter was quite good, though.

Now, as for the pasta and pizza:

I ordered Enlgish pea lune, a kind of moon-shaped ravioli:

The pasta was fine, very fresh tasting but nothing exemplary.

The pizza, on the other hand, was exemplary. This is it folks: the best pizza in Atlanta. The crust is perfectly charred, the toppings and cheese perfectly balanced. It’s a truly perfect pizza.

With the pizza, our Floataway meal redeemed itself.

Don’t you hate when you love a place, though, and you go there to relive your love and the love doesn’t happen? Like meeting an old flame for coffee?

Speaking of coffee, Floatway serves theirs in a french press:

And as for dessert, Lauren was quite thrilled with their flourless chocolate cake: 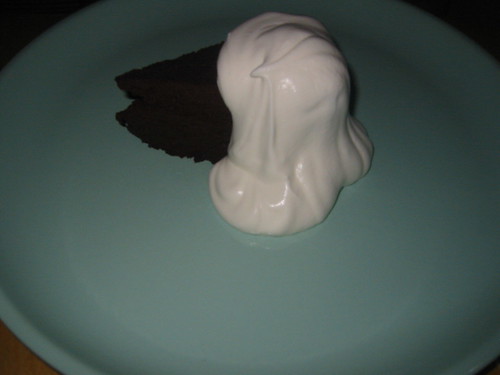 After dessert, I journeyed to the bathroom. Thought I would photograph the Vespa in the hallway, because how often do you see a Vespa in a hallway?

Soon our check came. We got up to go. Here’s what the place looks like, so you get a better idea of the feel:

We walked out full and contended. Not thrilled, though. It was definitely an off night at The Floatway. Later on, our friend Meg told us that the owner/chef (I forget her name) who also owns Bacchanalia no longer does the cooking at The Floatway. Maybe that’s why it went downhill? Ah well. To quote Earth Wind and Fire: “After the love has gone / what used to be right is wrong.”