The Best Fried Chicken of Your Life 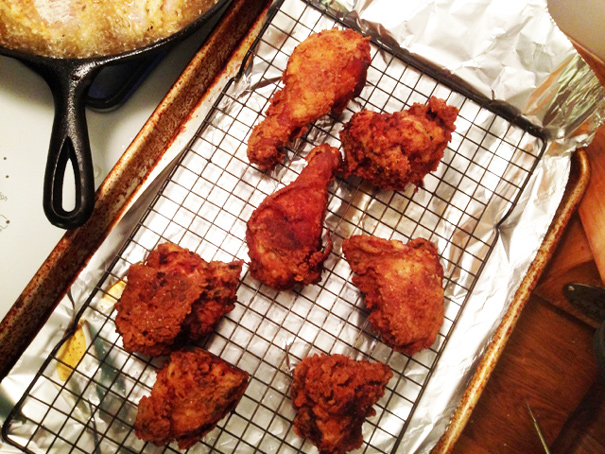 Give me credit. It’s been a while since I’ve declared something “the best ___ of your life.” There is, of course, the broccoli, which brought all of you to my blog in the first place. Then there’s the chili which, as far as I’m concerned, has never been topped. The brownies remain unrivaled and the curry is definitely the best I’ve ever made.

Now, into the pantheon, comes this fried chicken which–as you’ll soon discover–has nothing to do with a specific recipe and everything to do with a piece of equipment that costs a minimal amount of money ($33.31 on Amazon) but makes all the difference in the world.

What is it? You can just catch the corner of it in the lead picture of this post: a cast-iron skillet.

When I was writing my cookbook, I went down to Athens, Georgia where a very nice woman named Angelish Wilson taught me how to make her famous fried chicken at Wilson’s Soul Food. Like most restaurants that serve fried anything, Angelish had a deep fryer and when it was time to fry the chicken, she submerged it into the hot oil. It was a lot like the way I used to fry chicken at home, only a deep fryer maintains the heat better than a Dutch oven can. 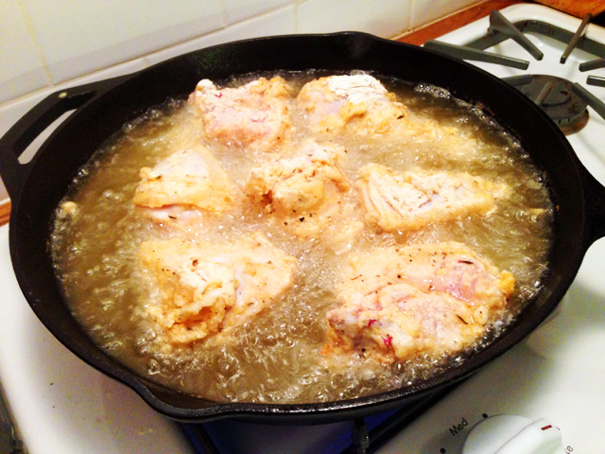 When it came time to shoot the fried chicken recipe for the cookbook, our food stylist, Leslie Stockton, didn’t fill a Dutch oven with oil the way I had. She whipped out a large cast iron skillet, filled it 1/3rd of the way with oil (using way less oil), cranked up the heat, and when the oil hit 350, she fried the chicken in there slowly, flipping it every so often, until it was crisp all over and everyone on the set rushed over to devour what she had made. It was some of the best fried chicken I’d ever tasted. 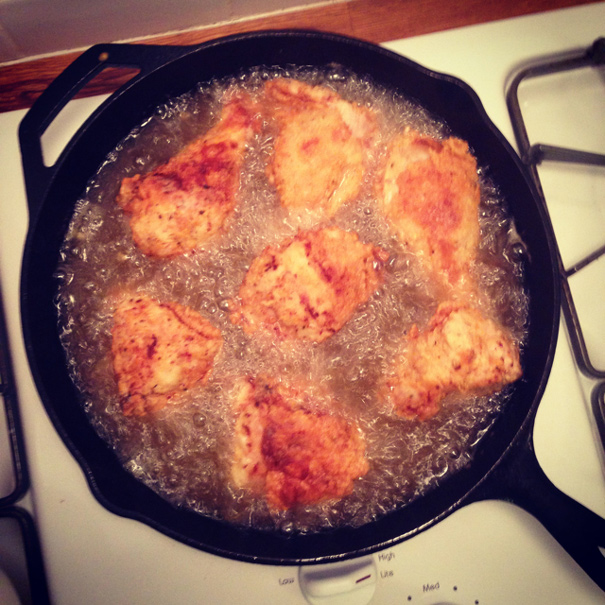 There’s some mystical, magical mojo that happens in a cast iron skillet when you fry chicken in there. My theory is that, because it’s cast iron, it maintains the heat better than any large vessel (like a Dutch oven) can at home. It better replicates a deep fryer at a restaurant. And it’s important to maintain that heat because the lower the temperature of the oil goes, the more of it that gets absorbed into the chicken. If your fried chicken is greasy, it’s because your oil didn’t stay hot.

Hence the cast iron. Once you have that–and you’ll want to use a large one (I borrowed my friend Diana’s)–the rest takes care of itself.

Still, if you want it to be the Best of Your Life, you’d be wise to soak the chicken overnight in buttermilk spiked with a little Tabasco sauce. I bought two 4 pound chickens, cut them up into 10 pieces, put them in a large Tupperware that was filled with a carton of buttermilk whisked with 10 dashes of Tabasco.

The next day, I brought the chicken to room temperature and dumped a bunch of flour (3 cups or so?) into a large bowl and spiced it with some ground cumin, smoked paprika, cayenne pepper, garlic powder, dried thyme, whatever I could find. Salt too. A good tip here it to taste the flour mixture raw (gross, I know) just to get a sense of how flavorful it is. Just put a little on your finger and taste; you’ll be glad you did. 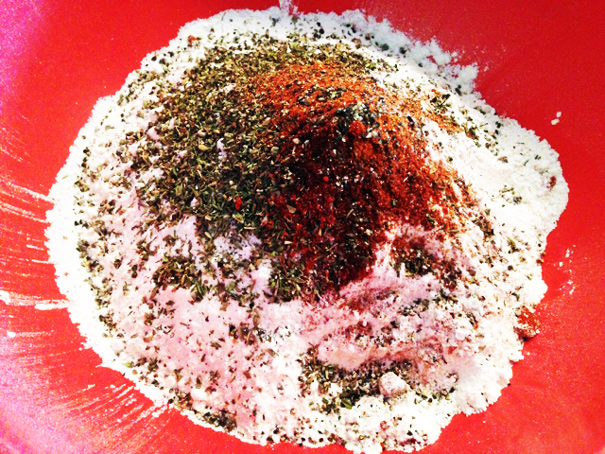 A key step, I discovered, for truly excellent fried chicken is to season the chicken between the buttermilk and flour stage. So here’s how it went: I poured vegetable oil into Diana’s cast iron skillet until it came 1/3rd of the way up. Then, as it began heating on high heat, I lifted pieces of chicken out of the buttermilk, scraped off as much buttermilk as I could with my fingers, then I had Diana season each piece of chicken with a little salt before I dredged it in the flour mix. Then, when the oil hit 350, I began lowering chicken into the skillet (carefully!) watching the level of the oil. At the most, the hot oil should come halfway up the sides of the skillet when you have your first batch of chicken in there. Any more and you might have a grease fire.

Then it’s just a matter of watching the chicken, turning after 5 minutes or so, waiting another 5 minutes, and going and going until it’s dark brown and crispy all over and a thermometer inserted into the chicken reads 165. Then use clean tongs (not the ones you used to touch the raw chicken) to lift the finished chicken on to a cooling rack. 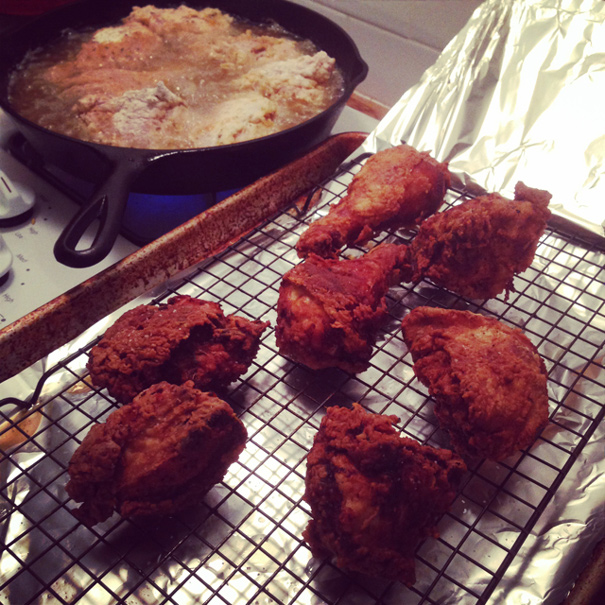 Sprinkle those with salt, then repeat with the rest of your chicken.

What else is there to say? It’s a dinner that everybody loves but few people are brave enough to make. Turns out it’s not about bravery, it’s about equipment. So equip yourself with a large cast iron skillet and prepare yourself for the Best Fried Chicken of Your Life. Do it quick, before summer’s over! (You can take the leftovers on a picnic.) 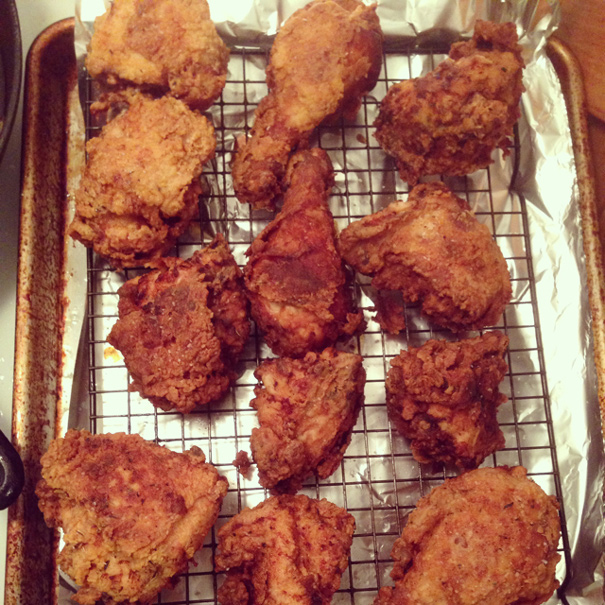 Recipe: The Best Fried Chicken of Your Life

Summary: For those too impatient to read the post, but you really should because it’s not about a specific recipe.